Mathura, being the birthplace of Lord Krishna, is one of the important Hindu pilgrimage sites. Every inch of Mathura is clothed in reverend devotion to Lord Krishna, the eternal lover of Radha, the warrior, the diplomat and the hero of the cowherd colleagues. Mathura without Lord Krishna is like Life without Water.

There is hardly any need to mention that the city of Mathura (and the whole of Brajbhumi, for that matter) is not an ordinary material city, for it is the transcendental abode of Lord Krishna and His consorts and a Cosmic Place for His Divine ‘Leela’ sport. 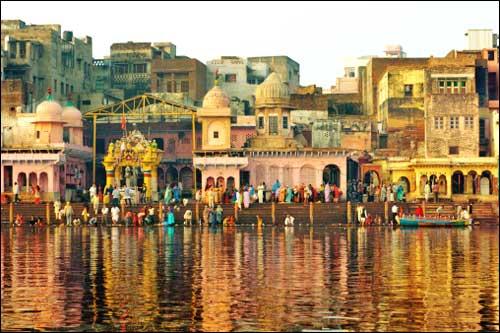 You can go on counting the holy places in Mathura without ever coming to an end. This is easily understandable in light of the fact that there is the legend of Lord Shri Krishna connected to virtually every nook and corner of the city. For instance, the ‘Vishram Ghat’ on the Yamuna Waterfront is said to be the holy place where Krishna is supposed to have rested after killing his tyrannical and evil uncle - King Kamsa.

From the moment Krishna was born up till the time He grew into a valiant youth, the bigger part of his time was spent in Brajbhumi, mainly constituting Mathura, Vrindavan, Gokul, Nandgaon, Govardhan and Barsana.

The story begins from Krishna’s birth in a prison cell of Mathura. Since Kamsa had vowed to kill Krishna, His father Vasudev carried Him across the ravaging river Yamuna to the house of Nanda in Gokula. Krishna spent his early childhood in Gokula and revealed His divinity in many a way, including killing Demon Putna by sucking her breasts. Kansa’s continual murderous forays forced Krishna to move to Nandgaon, a much more secure and safe home higher up on a hill. From Nandgaon, the young Krishna would venture into Vrindavan to play with His fellow cowherd friends and dillydally with Radha, His beloved. Each bud and flower of the area bespeaks and is a testimony to their Divine Love, even today.

The Bhagavad says that Shri Krishna had performed the famous “Rasa Dance” with the Gopis of the area close to the banks of the river Yamuna in Vrindavan. And, when the Gopis were conceited about Lord Krishna dancing with them, He vanished from their sight. The agony of separation from their beloved Krishna led the Gopis to recall and enact His ‘lilas’, which in due course came to be known as “Rasalilas”.

A Brief History of Mathura

Mathura has an ancient history and finds a place in the oldest Indian epic - the Ramayana. The Ramayana says that Shatrughna, the Ikshwaku prince, had slayed a Demon called Lavanasura and gained the place. Later on, the place came to be known as Madhuvan, being wooded thickly, still later Madhupura and finally Mathura.

By the fifth century BC, in the times of Buddha, it acquired the status of a major metropolis and the capital of the Surasena kingdom - one of the sixteen ‘Mahajanapadas’ of that era. Mathura went on to see its golden era during the rule of the Kushanas when ably governed by rulers of the like of Vashishka, Huvishka, and Kanishka, its art and culture flourished and its economic wealth minted. Mathura continued to remain a powerful center during the Mauryan era, through the benign rule of Emperor Ashoka on to the Gupta period beginning about 4th century AD.

On his journey to India in the 3rd century BC, the famous historian Megasthenes describes Mathura not only as a place of great regional importance but goes on to suggest that it was then, as it is even today, a centre of Krishna worship.

About A.D. 400, the Chinese traveler, Fa Hien, mentions the city, as it were, as a centre of Buddhism and many a famous temples; the city was ransacked and quite a few of its temples were destroyed and defiled by Mahmud of Ghazni and, later on, by Sikandar Lodhi.

Located in the western part of the state of Uttar Pradesh, Mathura is well entrenched in the north of India. It forms a part of the great Indian northern plains and is towards the west bank of the river Yamuna. To be very exact, Mathura is favorably located 60 km north-west of Agra, the former capital of Hindustan, famous and very well known for its illustrious Taj Mahal built by Shah Jahan in the memory of his beloved, Mumtaz Mahal, and 140 km south-east of Delhi, the internationally renowned capital of India now-a-days.

Mathura forms the nucleus of Braj bhumi, the land known for the childhood pranks and youthful sports of Lord Shri Krishna. Encompassing an area of approximately 3,800 sq. km., Brajabhumi can be broadly divided into two distinct units - the eastern side of the Yamuna with places like Gokul, and the western part in the trans-Yamuna tract that covers the Mathura area covering basically Vrindavan, Govardhan, Barsana and Nandgaon / Nandagram. 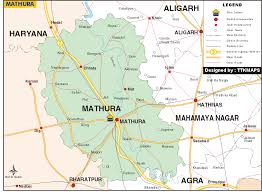 Mathura enjoys a climate that is typically north Indian in nature. During summer, the mercury may jump even up to 45 degree Celsius while it hardly goes below 27 degree Celsius on the lower side. Thus, the scorching heat and almost unbearable humidity of the summer months turns many a tourist away from visiting the holy town in the months of April to June. However, during monsoon, Mathura gets a benign level of rainfall (20 mm on an average from June to August) that brings the mercury down sharply.

Winters, the months from December to February, on the other hand, remain comfortable and pleasant, though you may feel a little chilly occasionally. During this period, the minimum temperature more than often drops below 4-5 degree Celsius while the maximum mostly stands at about 12-14 degree Celsius.

Mathura, the holy city especially for Hindus, forming about a third of the population of the world, is a host to many places of religious and historic importance. You can even enjoy excursions to its nearby towns like Gokul, Nandgaon, Barsana, to name just a few, which are of no less religious or historical significance. Vrindavan, the tranquil calm and quiet hilly dense forest region, is the ideal foil and retreat to Mathura. All these places, of course including Mathura, have been the home of Lord Shri Krishna in His prime at one or the other time, and thereby have a multitude of temples belonging to various sects of Hinduism, which proudly proclaim Lord Krishna in His various forms and Avatars.

Everyone sells these dessert brown little things – ‘lal pedas’ - here but the best store to get yours, after trying from a few places, would be Brijwasi. There are a lot of Brijwasi's too, so go to the original and most popular one, the big signed store opposite International Guest House or the one at the Janmsthan. They do add a plenty of cardamom though. There are three most famous shopping arcades/plazas/malls in Mathura – D.D. Plaza at Junction Road, Bajrang Chowraha on Maholi Road, and Highway Plaza in Krishna Nagar.

Click Here to Read more on Shopping in Mathura

Holi is celebrated with great fervor on the full moon day in the month of Phalguna (Feb-March). In fact, Holi in Braja is celebrated for several days, at different places around Braja, before the actual day of Holi.

People throw colored water and colored powdered dye on each other. This is most festively celebrated in Braja, especially at Barsana and Nandagram. In Barsana, the festival encompasses colorful processions with dances, songs, music and extremely boisterous scenes around the temples. If you do venture to go to these festivities you should expect to be totally covered from head to foot in dye and color, and never to be able to use the clothes that you are wearing again, until at least the festivities of the next year. These celebrations are usually around the same time as ‘Sheetla ashtmi’ and the beginning of the “Navratras” (a festival connected with the worship of Goddess Durga) and to be very exact, on the ninth day (naumi) of the month of Phalguna.

In the afternoon Gopas (men) from Nandagram come to Barsana and play Holi with the local Gopis (women) of Barsana. The women hit the men hard with 2m long bamboo staffs. The men protect themselves with the shields they have brought with themselves. Local playful songs are sung during this time.

On the tenth day (dasami) of the month of Phalguna, the day after the Holi festival at Barsana, Holi is celebrated in Nandagram. The Gopas (men) from Barsana come to Nandagram carrying the flag of the Larily Lal Mandir in Barsana in an elaborate procession and play Holi with the Gopis (women) of Nandagram. This time around, the locals of Nandagram try to capture the flag, but all their efforts are put down and foiled. Once again, women play Holi with bamboo sticks.

On the full moon night in Phalguna, a huge bonfire is burned at Phalen and one of the local priests walks through the fire unscathed. This event is intimately connected to one of the stories relating to Holi, which is that Prahlada, the son of HrinyaKashpu, refused to worship his father and worshipped Lord Vishnu, whom HrinyaKashpu considered to be his greatest enemy, instead. Holika, the sister of HrinyaKashpu, who enjoyed immunity from being burnt, was made to sit in a huge fire with Prahlada in her lap, in the vain belief that Prahlada would be burnt to ashes and thus taught a lesson for his recalcitrance. Prahlada's devotion to Lord Vishnu was so great that he emerged from the fire unharmed while Holika was burnt to death. The Holi festival at Phalen is performed as a reminder of this incident, clearly indicating the fact that “Vanity Dies Its Own Miserable Death” while “Devotion Lives On in ITS Own Glorious Ways Eternally”.

Mathura has a lot to offer when it comes to eating out especially roadside eating joints, mishthan bhandars and bhojnalayas. A fresh brew of ginger, cardamom and some other spices thrown in and served in kulhads, you can enjoy your morning/breakfast tea with a host of snacks including crispy kachoris, deep fried samosas and melt-in-the-mouth delicious jalebis.

For Lunch/Dinner, we suggest you visit Dalmiya Bhojanalya, near the Vishram Ghat and enjoy Indian Thali.

Lal Peda, a famous specialty of Mathura, just cannot be missed. You can treat yourself at Shankar Mithaiwala or Brijwasi Royal Mithaiwala, both of them at Holi Gate, the latter being the biggest food shop that you will come across in Mathura.

How to Reach Mathura

Mathura is well connected by train and road to the major cities in India although it doesn’t have an airport just as yet (however, construction is in progress near the Yamuna Expressway, with plans to open in the next five years with regular flights to Delhi, Mumbai, Ujjain and Varanasi and some international routes in future.)

The nearest domestic airport is Agra. There are regular flights to other important tourist destinations of India such as Delhi, Mumbai, Varanasi and Khajuraho. The nearest international airport is Delhi, which is connected to almost every important city in the world with major airlines.

Mathura is well connected by train with Agra (1 hour journey), Bharatpur, Sawai Madhopur and Kota. The Taj Express runs daily between Mathura to Delhi (about a 2 hour run). A meter-gauge line connects Vrindavan to Mathura. Besides, there are trains to the four major metro cities i.e., New Delhi, Mumbai, Kolkata, and Chennai. There are services from other major stations as well including Lucknow (the capital city of Uttar Pradesh) Jaipur (the pink city in Rajasthan), Hyderabad (the capital city of Andhra Pradesh), Bhopal (the capital of Andhra Pradesh), Kanpur (a major industrial centre in Uttar Pradesh), and Varanasi (the holy city connected intimately with Lord Shiva). Mathura has regular bus services to and fro from other areas of Uttar Pradesh as well as long distance routes to Howrah and Mumbai. Besides, the recently built Yamuna Expressway is a high track route connecting New Delhi and Mathura.

Comments / Discussion Board - About Mathura