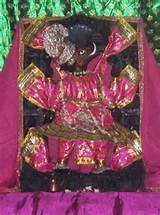 Being one of the oldest temples in Mathura and located nearby the world famous Dwarakadheesh Temple in Manika Chowk, the Adi Varah Temple is one of the popular local temples. Its popularity is partly due to the red color of its deity, viz. Lal Varaha. Incidentally, ‘Lal’ also derives from “Lalla” which means little or small; the Lal Varaha deity is small in size but big in stature. Lord Varaha is enshrined at two more places behind the Dwarkadheesh Temple.

The black deity of Varah (Krishna Varaha) is one of them. In Brahmakalpa (‘Kalpa or Yuga of Brahma’), during the reign of Swayambhuva Manu, Krishna Varaha manifested in a four legged, boar form from the nostril of Brahma, and kept the Earth on His tusk while bringing her up from the nether region (known as the ‘Rasatala’). The white deity of Varaha (Shvet Varaha) is the other one.

Shvet Varaha manifested from the ocean in the period of Chakshus Manu, having a boar-like face and human-like lower portion of the body. Incidentally, Shvet Varaha is also referred to as Nar Varaha (Nar stands for "human"); Nar Varaha is said to have killed the demon Hiranyaksha and rescued Mother Earth from the latter’s clutches.

Lord Adi Varah has a glorious legacy beginning with SatYuga when sage Kapil was His ardent devotee. The King of the Swarglok, Indra, sought the deity of Adi Varah from him who gave it unto Indra, thoroughly pleased with him. After defeating Indra in a mighty battle, Ravana brought the wonderful deity to his Kingdom Lanka. Having killed the notorious Ravana, Shri Ram established the same pious deity in His palace at Ayodhya. Shatrughna, the younger foster brother of Shri Ram, implored Shri Ram to pass on the deity to him while leaving Ayodhya on his mission to kill Lavanasur. Shatrughna duly carried the deity to Mathura and after having killed the unrighteous Lavanasur, established the deity in its current place, the Adi Varah Temple.

Adi Varah Temple is a very small one, in fact, it may not look like a temple at all. So, you may find it just a bit difficult to reach this destination. However, this temple is near Dwarakadheesh temple; you have to go down the street of Dwarakadheesh Temple about 270 meters, at the end of the road, you take a left and the Adi Varah Temple door can be seen. One can easily reach Dwarkadheesh Temple by taking local buses from Mathura Junction (the main and major railway station in Mathura) or the Mathura Bus Stand.