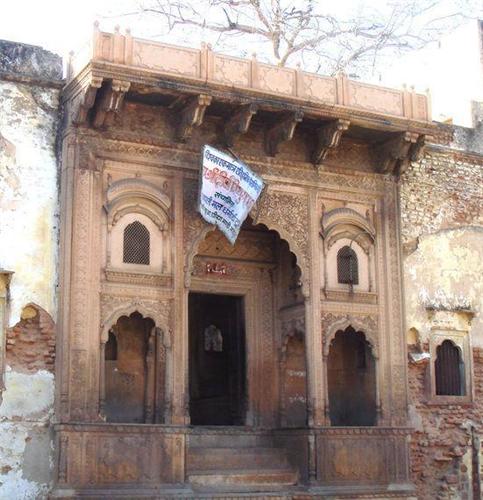 Finally, he sent Akrur to fetch Shri Krishna and Balarama to Mathura for sightseeing where he was challenged for a wrestling match with Kamsa’s wrestlers Mustika and Chanur. Before the match Lord Shri Krishna broke the sacrificing bow for the Dhanur-yajna and displayed his “Dirgha Vishnu” form to his companions to assure that he can defeat his enemies. In Dirgha Vishnu form Lord Krishna has expanded himself to large size just like he did it in his Vamana Avatar. With this, his family and friends were reassured that Lord Krishna can kill Kamsa easily. It is also said that Lord Krishna expanded himself up to the throne on which Kamsa was sitting.

This temple is the oldest temple in Mathura which was constructed by “Pradhuman”, the grandson of Lord Shri Krishna. This was renovated some two hundred years ago by Raja Patani Mall Bahadur of Banaras who also constructed the Shiv Tall. This temple is named after Lord Shri Krishna, the “Dirgha Vishnu Temple”. In this temple, the deity is made of black holding lotus, club, conch shell and disc. A small deity of Goddess Lakshmi is also present in the temple. This temple also falls under the category of Vaishnavite temple. Chaitanya Mahaprabhu also visited this temple during his visit to Mathura. Apart from regular pooja and aarti in the temple, festivals like Janmashtami, Holi and Deepavali are celebrated in a grand manner.

How to Reach Dirgha Vishnu Temple in Mathura

Dirgha Vishnu Temple in Mathura is situated to the north of Bharatpura Gate on the same road and 10 minutes from Bhuteshwara Temple. From Mathura Railway Junction head towards west and turn right towards Hathras-Mathura Road/SH80 then turn right at Chandra Software technologies pass the Mathura Roadways Bus workshop and take first left towards Junction road turn left at SR Computer Annexe onto Junction Road pass by Chowki Bagh Bahadur on the left there you will find Dirgha Vishnu Temple (Kotwali Road, Chowk Bazaar, Mathura, Uttar Pradesh 281 001).

Though the accommodation is available for the pilgrims in Dirgha Vishnu Temple, it is best to stay in the hotels in the Mathura city which offers luxurious rooms. The following hotels are closer to the temple with 3,2,1 star rating:


From there one can take a taxi or a cab to reach the temple or can travel by foot also.

Of course, the ideal time to visit Mathura is from October to March. Though it is winter, it is better to visit Mathura during that time of the year as the summer is unbearable. When visiting Mathura, one should not miss out on the local cuisines that are delicious including the ones that are made of milk. Do shop around the city especially for all your pooja needs. You can also buy handicrafts, clothing, footwear, decorative items in Mathura which boasts of intrinsic craftsmanship.

Visit Dirgha Vishnu Temple in Mathura and get the blessings of Lord Maha Vishnu!