Amidst the hustle bustle of this crowded city, stands a temple of great religious significance. The Krishna Janmabhoomi Temple is located near Mathura railway station. According to the legend it was predicted that Kansa, the tyrannical ruler of Mathura will be killed by the son of his own sister. In order to prevent his assassination, Kansa imprisoned his brother-in-law and sister. Hence, Lord Krishna was born in a prison and the exact spot where it is believed that Krishna was born is marked by a slab of stone. 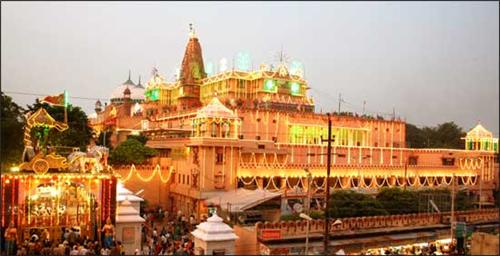 Other than being of great religious significance, this temple also has historic value. During Emperor Chandragupta Vikramaditya's reign, the original temple was replaced with a bigger one. This was one among the most magnificent temple structures present in the country at that time. However, it was Mahmud of Ghazni destroyed it completely. After being rebuilt in 1150, the temple was destroyed once again by Aurangzeb and a mosque was built at its place. Krishna Janambhoomi Temple is built right next to mosque.

The present structure was constructed back in the 20th century. It is believed that the original deity was placed by the great grandson of Lord Krishna, Vajranabha. Krishna Janambhoomi temple has gone through a number of architectural changes over all these years. The present temple complex represents typical Hindu-style architecture. Krishna Janmabhoomi Temple is the perfect representation of the tradition and rich culture of this country. The complex has been divided into several segments and each of them is exceptionally beautiful. There are many festivals that are celebrated with great fervor in this temple. Some of them are listed below. 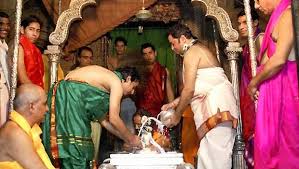 Janmashtami in Mathura is celebrated with great joy and in a traditional way. It is believed to be the end of sorrow and happiness emerging due to the birth of Lord Krishna. On Janmashtmi all temples of Mathura are decorated with lights, flowers, religious flags, other decorative materials and special dress material for Radha and Krishna. There are devotional prayers and dramas carried out in every temple of this city by the professional artistes from within the city or from the outside. They play some dramas of Krishna's childhood activities. The celebration of this festival lasts for several days and efforts are made to make the current year's celebration memorably and in a unique way than the last year's one. This festival comes to its peak at the night of Krishna's birth. Several sweets are prepared to be offered as Prasad in the temple. They are prepared by the use of traditional ingredients. Devotional bathing also hold its rituals in this festival.

Holi is among the most popular festivals of Mathura and the surrounding areas. The celebration of Holi takes place in the tradition pattern which has been followed from the ancient time. People celebrate Holi in different way in Brij where several activities are performed by the people of the area. In Mathura the occasion is marked as the most colorful day and is continued for several days. It starts on the Phalgun Amavasi and gains the peak on the day of Ekadashi. Whole of the Mathura city is decorated in the colorful pattern and the environment is covered by the colors.

At the time of Holi several devotional and specific songs are specially sung every year in Krishna Janmbhoomi Temple in Mathura. Several dramas and singing undergo in a traditional way. The skies are covered by the gulals and other colors for several days. Special drama of Holika and Prahalad is also performed in traditional and classic way on the eve of Holika dahan.

Basant Panchmi is celebrated at Mathura's Krishna Janmbhoomi Temple in special way where the idols of Krishna is specially dressed in the yellow and special ornaments. All the temples of Krishna are decorated in yellow along with the entire city. The yellow light adds an additional charm to the celebration. Special bhoj of kheer stuffed with saffron and yellow rice is offered in every temples of Mathura. People from entire world visit this place to fell the love of festival and be the witness of this eye catching decorations of the temples and the Mathura city.

Deepavali is the famous and biggest festival of Hindus of India. During these festivals whole of Mathura is decorated with colorful materials, colors, special lights, etc. Temples are decorated with tradition clothing of idols. Special prayers are carried out with people of the city distributing sweets among their relatives and near and dear ones. This festival is the occasion where people ignore their personal disputes and share their happiness with their neighbors. This festival generates brotherhood among the people. This Deepavali is followed by Govardhan pooja and delicious food in the form of Prasad are offered in temples. The grand fest is also performed in the entire city.

This festival of Sharad Purnima is celebrated with great joy and happiness at Krishna Janbhoomi Temple in Mathura. In this festival several Raas Leelas are performed whole night in the Temple. It is celebrated on the full moon day of Lunar month of Ashvin which tends to the end of Monsoon. Special worship of goddess Lakshmi is performed in the Mathura.

This festival is celebrated as the birth anniversary of Radha. Several devtional programs and songs are played at Krishna Janmabhoomi Temple during Radhashtami. Radha-Krishna songs are very famous at this time and are sung by every pilgrims visiting this place. Several Jhankis are organized across the city with dressing the deity of Radha and Krishna with special ornaments and dresses. There is a trend of offering prasads prepared by different ingredients such as Panjeeri, Rajbhoj, Matharis, Sakalpara, Gujhias, etc.

This festival is celebrated for the occasion when Krishna became the independent cowherd for the first time. It is basically celebrated in the month of Kartik and cows are worshiped. Cows are brought to Krishna Janmabhoomi Temple where they are decorated well and are worshiped along with Lord Krishna.

Explore more about Culture of Mathura