Mathura is known for its religious celebrations and attracting huge pilgrims all around the year. This city is filled with religious prayers, festivals and fairs throughout the year. There is some or the other celebrations which continue to attract the people from entire world. There are several festivals such as Holi, Deepavali, Janmashtami, Rath yatra and several fairs which are the part of attraction in the city. Following are the festivals and fairs in the Mathura city. Every festival is celebrated in the form of fairs where people from entire world gather to celebrate and enjoy the same. 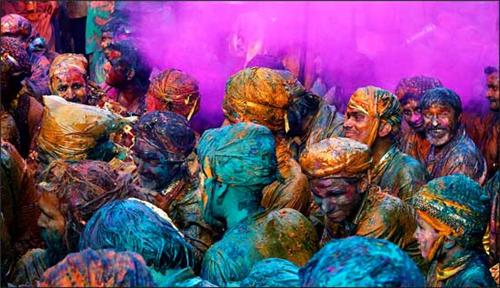 Holi is a festival of color. It is celebrated as the festival of end of sorrow and happiness entering into life. This is the most popular festival of Mathura and the nearby areas of the city such as Brij, Barsana, Nandgaon, etc. The celebration of this festival is carried out in a traditional style and several cultural activities are performed during this festival. There is a difference in the way of celebration of Holi in Mathura and in the rest of India. It is known for the latthmar Holi. This is the most colorful day in the city where the streets and people everyone is covered by colors. This festival is started from Phalgun Amavasi and lasts for several days. In this festival several events are conducted which includes devotional songs, dramas that are carried out in a tradition a way. Gulal is spread all across the city and special drama of Holika Dahan is performed in classic way by experts.

This festival is known as the birthday of Lord Krishna and is celebrated with great passion and energy across Mathura. People of this city wait for the whole year and make preparation to celebrate the next year's Janmashtami better than the previous year's. This festival brings the hope in the people that their sorrows will be removed and happiness will enter their life. This festival is basically celebrated in the night, where all the temples of Krishna are decorated with colorful flowers, materials and new dresses are offered to the idols of the temple. Several dishes and sweets are prepared by the milk and curd which are offered as the prasad in temples. Devotional bathing also forms the great ritual in the city. Dramas related to Krishna's childhood are performed by artists whole night and devotional songs are sung.

This festival is the biggest festival of Hindus all across the country. It is the festival of lights where all the streets, houses and temples are lightened. This festival is celebrated in a traditional and cultural pattern in Mathura and differs from the rest of India. Sweets are distributed within friends, relatives and neighbors. It is the festival of victory and happiness entering the life. Mathura is decorated with colorful lights, shops are filled with different sweets and there is a huge shopping of materials in this festival. Personal disputes are ignored and environment of brotherhood is created. After this festival there is a another festival of Govardhan pooja. 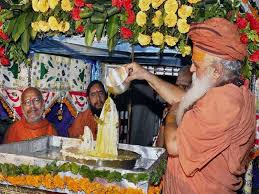 This festival is celebrated as the birth anniversary of Radha. Several programs and songs are played in devotional tunes across Mathura and in ever temples of the city. Radha-Krishna songs are very famous at this time and are sung by every pilgrims visiting this place. Several Jhankis are organized across the city with dressing the deity of Radha and Krishna with special ornaments and dresses. There is a trend of offering Prasads prepared by different ingredients such as panjeeri, rajbhoj, matharis, sakalpara, gujhias, etc.

This puja is known as the Annakut and is celebrated as the day when Lord Krishna defeated Indra Dev. This festival is celebrated at the fourth day of Deepavali. It is the the day of Shukla Paksha as per Hindu calendar. It has special ritual to undergo the parikrama of Govardhan hill under which Krishna saved the people of this area.

Guru Purnima is celebrated in the form of offering prayers to their gurus. Gurus are the teacher who teach all the aspects of the life and shape our future. Therefore, they are the people who should be worshiped in the same pattern as God. This festival is celebrated on purnima between the month of June and July. This days is the crowded day where pilgrims offer praters along with taking parikrama of Govardhan hill.

This yatra is also celebrated in the form of festival. Braj Yatra takes around 50 days and is celebrated in Mathura. This is held just after the famous festival of Janmashtami. This holy Yatra is believed to relieve people from their sins. This yatra is known as the Chaurasi kos which is 84 kos and covers nearby areas of Mathura including 25 groves, 12 vans, hill of Govardhan, river Yamuna, etc. It takes place in the moth of Bhadon which includes heavy rain which adds special charm to the yatra.

This festival is the greatest entertaining festival where several activities are performed during the Rath Yatra. It starts by the devotional songs and then the ritual way of commencing the Rath Yatra from the temple to the city and then back to temple. On the way devotees contributes in the rath journey in which the idols of Jagannath along with Lord Balbhadra and Goddess Subhadra is carried out. There is a special decoration of the rath and the way in which yatra is carried. It is encrypted with precious and valuable stones such as diamond, gold, silver etc. The preparation of rath takes several months to be completed and efforts are made to make it better than the previous years. On the way several songs, dramas sad are carried out. Pradad is distributed on the way by priests. There is a zeal to pull the cart and devotees offer huge monetary offerings to the temple for this opportunity.

It is the festival of enjoyment which occur at the time of Basant. At the celebration of this festival the idols of Lord Krishna are decorated and dressed in traditional and ritual pattern, dress of the idols are yellow as per the environment and the temple is also decorated with yellow and different other flowers and ornaments. This yellow color is the specification of the festival along with special dishes and sweets such as kheer, yellow rice and other dishes which are specially prepared in yellow color. This is the time when most of pilgrims visit this city to celebrate this festival and enjoy the pleasant monsoon.

In this festival of Sharad Purnima there is a special environment of happiness and celebration all across the city. It is the time when different Raas Leelas are conducted from the life of Krishna by the experienced artists. This is celebrated whole night in different pattern with great artistes and local dramatists. It is carried on the night of Ashvin which is at the end of Monsoon, Goddess Lakshmi is the main center of worship.

This festival is related to the Hindu Lord Shiva, which is celebrated on the 13th night of Maagha as per Hindu calander. It is the day when Lord Shiva and Goddess Parvati got married. Special prayers and aartis are offered whole night by the pilgrims and activities of the marriage are the center of attraction.

In this festival cows are worshiped in every temple of Mathura. This is the day when Krishna became an independent cowherd during his childhood. It is celebrated in the month of Kartik.

During this festival there are special dramas conducted which is based on the killing of Kansa (the maternal uncle of Krishna) by Krishna. It is the biggest fair where people visit to seen the dramatical representation of the act. It occurs on the 10th day of Shukla Pakchha in Kartik month.

India is known as the country where several rivers flow. These rivers are worshiped on several occasions and holds importance in religion. This city is situated on the bank of river Yamuna, therefore, there is an aarti conducted everyday of this holy river. It is held at the Vishram Ghat.

Explore more about Culture of Mathura