Mathura may well be called the land of flowing milk because of the large numbers of cows being raised there. The milk given by the cows is utilized for drinking, making tea and making the world famous ‘Mathura ka peda’, a milk-based sweetmeat besides a huge range of others.

The delectable palate of Lord Krishna was raised on milk and milk products especially butter. Stories abound of how he and his gang of ‘makhan chors’ would sneak around to where the lady of the house put her freshly churned butter and they would connive a number of ways and devices to get at the yummy food. 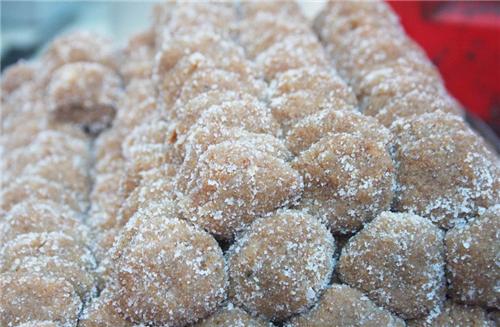 The earliest settlers of Mathura were cowherds and lived the simple lives of shepherds, tending to their flock and living by the produce of their lands. Basically wheat eaters, the people of Mathura are used to a large variety of breads being made on their tandoors or ovens and also on the skillet or tawa. The many types of roti or leavened breads that form the staple food of the Mathura dweller and those who visit it are tandoori roti, lachcha parantha, kulcha, sheermal, taftan and millet or barjra roti. Most of the rice eating done here is in the form of ‘kheer’ or a porridge made with milk and rice and saturated with all forms of dry fruits like raisins, almonds, cashews, cardamoms etc.

Mathura has stuck to a vegetarian diet despite the fact that there is tremendous influence of the Mughal cooking style on the foods. The rich gravies and steamed cooking forms have made the vegetarian dishes of Mathura a foodies' dream come true. Even the simple potato has become a hot favorite when it is called the ‘Dubke walae alu’ – a hot curried potato that is garnished with loads of fresh coriander. Its single distinctive factor is the additional burnt asfoetida flavoring.

The other vegetarian delights of Mathura are shared by most of the Awadhi cooking styles and include the making of paneer or cottage cheese dishes steeped in saffron and cardamom besides a variety of dry fruits. Thus, almost every humble offering from the kitchens comes camouflaged under the traditional Mughlai and Awadhi styles of rich gravies and condiments that are both fragrant and mouthwateringly inviting. 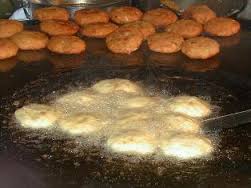 For those who live by the taste and crunchy bite of spices there are the large variety of snacks and street food available on the ghats and lanes of Mathura. The potato here again is a humble companion but an impassable inviting chaat. The french fries and potato wedges of fast food chains fall far behind before the offering of the Mathura ghat alu chaat. The potatoes are semi-boiled and cut up into rough pieces and left to shallow fry on a skillet or tawa. To this is added a range of masalas and chutneys and a spicy dash of green and red chilli. The person eating this concoction keeps asking for more. Similar are samosas, kachoris and tikkis of the Mathura streets. The mixed vegetable fritters or pakoras are also delightful fillers of a quiet evening.

A large variety of sweet preparations are existent among the sweets of Mathura. Besides the ‘Peda of Mathura which is famous all over the world there is the huge variety of sweets that are mostly mild based these are rasgulla, gulab jamun, ghewar, sheer korma, kheer, gujia, kulfi, halwa, lapsi, imarti, petha, jalebi, chchcenna, ras malai, gajar ka halwa, laddu motichoor, kalakand, etc.,

Just as there is a large variety of foodstuff, there are a large variety of sweat and salty drinks to wash away the rich effects of the heavy cuisine. There are number of coolant sherbets to combat the extreme impact of the plains heat in summer. These are Gurahi sherbet or hibiscus sherbet, lemon squash, rose sherbet and khas sherbet to name a few. The other variants in beverages besides tea are chaas, lassi and raita.

Thus, Mathura has a large variety of cuisine to offer the tourist depending upon how experimental they are willing to get with their palate.