Mathura is a well-known religious and historic city for all Hindus, especially Lord Krishna’s devotees. It is also the initiating land of India’s largest religious family - ‘The Gayatri Pariwar’.

Gayatri Tapobhumi, the main place for Gayatri followers is situated in Mathura city. It was established by Pt Sriram Sharma Acharya, also known as Gurudev in 1950. It is the place where Guruji completed recitation of 2 lakh 40 thousand Gayatri Mantras per year (known as 24 Gayatri Mahapurascharan). It became sacred place as it was the Tapobhumi of respected Gurudev. 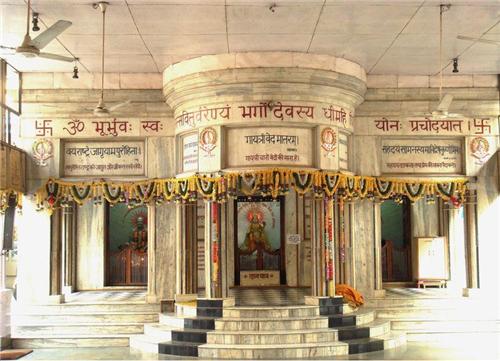 The auspicious soil and holy water was collected from around 2400 various pilgrimages, then worshipped and then this soil and water was used for the foundation of Tapobhumi which was established to mark the closing ceremony or purnahuti of Mahapurashcharans. In this building, a splendid and huge Yagnashala was built, ‘where Akhand Agni’, the flame lighted from a 700-years-old sacred fire source which is said to be ignited by a sacred saint was reinstated. At the time of its ignition and enlightment of Yagnashala, Pandit ji kept fast for 24 days without eating anything, only taking water of sacred Ganga River. The Deity of Vedmata Gayatri Maa was also established here at this time after performing rituals of ‘Pran Pratishtha’. Those 240 billion Gayatri Mantras that were written by ardent followers and disciples of Gurudev are kept here securely.

The reverberating family of ‘Gayatri Pariwar’ was also initiated here. A grand yajna called as ‘Narmedh Yagna’ was performed at Tapobhumi’s Yagnashala which afterwards was followed by ‘Sahastrakundiya’(meaning 108) yagya in 1958. Lakhs of devotees gathered from each corner of country for this yagya and around 4,00,000 devotees participated in this ceremony. After the yagya , around 1000 centres of Gayatri Mission were started throughout the country. At this occasion, Gurudev also declared his ambitious ‘Yug Nirman Yojna’.

In 1963, Gayatri Tapobhumi also initiated a training centre naming it ‘Yug Nirman Vidyalaya’ and the manifesto was published as ‘Yug Nirman Sat Sankalpa’. It was established with chief aim to make people self reliant by providing them training on basic skills. In 1971, Gurudev left the Tapobhumi and went to shantikunj in Haridwar. Pt. Lilapati Sharma became the mentor of this Sansthan since then.

There were many constructions done in Gayatri Tapobhumi to extend it to suit requirements of students as well as Sadhaks coming here. There is a grand Prajanagar for housing solution and also many modern machines are installed for publishing literature. Various camps are continuously conducted since 1953 and millions of visitors and Pariwarjans have performed Anushtans here. Everyday Regular Japs of Gayatri Mantra and Yagya in Akhand Jyot are performed as a sacred practice. The Akhand Deep is also kept ignited here. During the Golden Jubilee celebrations of Gayatri Tapobhumi, images of Pujyaniya Guruji and Vandaniya Mataji were instated here.

Gayatri Tapobhumi is a no profit organization. Around 3200 books written by Gurudev in his lifetime as well as other books on the life and studies of Gurudev and on various other subjects are available here only for the cost of publishing.

There are some rooms available for pilgrims, but as a tourist, it is advisable to stay at Mathura and visit on one’s own convenience. Various hotels, lodges and rest houses are available near Tapobhumi which one can hire according to one’s convenience. Also accommodation can be booked in advance at Government Guest houses and Hotels.

Auto, cabs and rickshaw are easily available for Gayatri Tapobhumi. One can also asked hotel staff to arrange cabs for this place. Located at Vrindavan road, Gayatri Tapobhumi is easily approachable by any of the road transport.