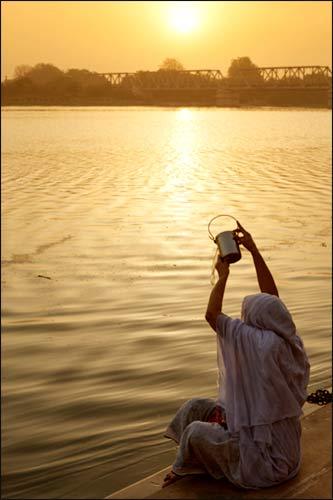 The geographical location of Mathura makes it an ideal tourist place that can be enjoyed most of the year except its severe winters which are for a short duration and extremely hot summers which too are short lived as they are soon overcome by the welcome monsoon showers.

Located on the latitudes 27.17 degree N and 27.28 degree N and longitudes 77.41 degree E Mathura lies in plains having the highest altitude of 287 meters. This provides a pleasant climate in the entire region almost all the year round i.e. from March to late October. Situated on the banks of the Yamuna river the city has a pleasant climate throughout the year making cool breezes wafting in from the river waters in the evenings and the hot city winds blowing out at nights.

The Spatial Alignment and Gradient

The wide plains are marked by two landmarks. Firstly, there is the meandering Yamuna and its network of tributaries and distributaries. Secondly, there is the soft hill rise of the gradient to a height of 290 odd meters giving the city a fort-like appearance from afar.

There is the large expanse of the city on both sides but the ghats or stepped river edges which are famous the world over like the Vishram Ghat or the resting Place of Lord Krishna after he had defeated the evil King Kansa and reinstated the rightful venerated King to the throne. It was here on the river’s edge that the Lord and his older brother Balaram had cooled themselves in the soothing waters of Yamuna.

Seasons in Mathura are winter encompassing December to February; summer comprising April to June and the Monsoon spreading over July to September. The period from October to March is best suited for pilgrimages probably also because of a number of cultural and religious events being associated with this period including the birth day of Lord Krishna which is celebrated with great pomp and gaiety as Krishna Janmashtami. During summer temperature ranges from 22o to 45oC while the winter temperatures dip from 31o to as low as minus 3oC. Therefore, even if one is inclined to visit the temples and historical places of Mathura it is advisable that the period between October to March be consider ideal for travelling. Travelers should carry light cotton clothes as all others would be counter-indicated in the hot summer months.

Mathura falls in the rich ‘doab’ or area between two rivers of the northern plains. It has rich fertile plains. The general slope of the town is from the Northwesterly direction towards the South-easterly direction that drops into River Yamuna. The soil is rich and fertile though having more of a sandy texture. The main agricultural products are grains, potatoes, oilseeds and sugarcane.

Mathura is situated 187 meters above sea level. The climate is dry and conducive to the ripening and sweetening of fruits like the mangoes which are in abundance in the area. As per the Census of India 2001 the population of the region was 2,07,451 strong and has grown steadily over the past decades. It is having 736 inhabited villages.

The geography of Mathura has had a profound impact upon the climate and topography of the region. Being a plain area it offers pleasant showers during monsoons, at the end of a hot searing summer around which several festivities have been arranged in the form of celebrations, competitions and contests that draw tourists from the world over.