Mathura being the birth place of Lord Krishna, various temples and forts are related to him. Hence, Mathura is considered as a sacred city for Hindus. Of the many temples in Mathura for Lord Krishna, the Gita Mandir in Mathura has the carvings of Bhagavad Gita which was preached by Lord Krishna to his disciple Arjuna, the Pandava Prince during the Kurukshetra War.

Bhagavad Gita or Gita is a 700-verse dialogue between Lord Krishna and Pandava prince Arjuna where Lord Krishna preaches the duty of a Kshatriya amidst the battlefield during the Kurukshetra War. Being preached by Lord Krishna about a human being’s duty in their life, the Bhagavad Gita becomes holy book of Hindus and revered by all the Hindus across the world. 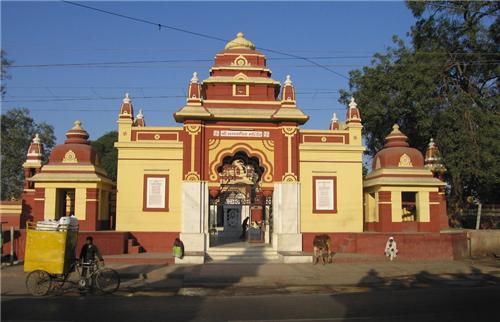 Gita Mandir in Mathura was built by Jugal Kishore Birla, the famous business group, the Birla group in memory of his parents and all the 18 chapters of Bhagavad Gita are written on the pillars of this temple. This temple is situated at the outskirts of Mathura and on the road to Vrindavan and is 5 kms away from Mathura city. From Mathura, one can either take a private taxi or bus to reach the temple.

Gita Mandir is a fusion of Hindu culture, paintings, tradition and beautiful architecture with the western genre. The temple is large and looks magnificent in a red sandstone and it also stands as a proof of excellent craftsmanship. The deities of Lord Krishna, Lakshmi, Narayana, Rama and Sita are well adorned and ornamented. The temple involves gita regency abode, Lord Krishna’s Chariot and the Gita pillar has the entire carvings of Bhagavad Gita. Apart from the idols, it also boasts off several exquisite paintings of gods and goddesses on its marbled walls. The temple is maintained well and presents a peaceful and serene ambience to the pilgrims. During the festivals like Janmashtami and Holi, the temple is beautifully decorated and illuminated and looks stunning.

There are only few accommodations available around the temple at an economical rate. Hence, it is ideal to stay in the Mathura city and to visit the temple. In Mathura, one will always find a good hotel at budget price with all luxuries. May be one can club your visit to Vrindavan with the Gita Mandir as it lies on Mathura-Vrindavan Road. The best time of visiting Mathura is October-March during which the climate is pleasant.

There is no surprise that one will find lots of cows in Mathura as it is Lord Krishna’s birth place. So Mathura is famous for various milk sweets. Of course, when you are visiting Mathura don’t miss out on the famous delicacies most of which are made of milk. One can also shop for spiritual books, devotional CDs, prayer beads, clothes, handicrafts etc.

It is always better to go for a packaged tour of Mathura which includes your logistics, hotel, sightseeing, shopping etc. You also will not miss out on any places that are worth seeing. Also, beware of overcharging by the taxiwallahs or the priests at the temples or of the monkeys that are trained to steal your valuables. These are the bane, a pilgrim has to undergo while visiting sacred places in India.

How to Reach Gita Mandir

Of course, one can reach Mathura by air with the Kheria airport, Agra being the closest one or by roadways or railways as it is connected well with other cities being one of the seven major pilgrimage centres in India.

From Mathura Railway Junction it is about 6.2 kms and one can take the local buses, tongas, auto rickshaws or private cabs.

Gita Mandir in Mathura is also known as Birla Temple as it was constructed by them. Pilgrims from all over the world throng this temple throughout the year. When you visit Mathura, don’t miss out on this temple.