The Giriraj Town is located at a distance of approximately 22 km from Mathura on the Deeg highway. It is well known as Govardhan, Govardhan Parvat and Shri Giriraj Ji. In the holy Bhagwad Gita, Lord Krishna says that Govardhan Parvat is non-different from Him and thus, all devotees worship the rocks of the Holy Parvat is the same manner as they worship the Lord. 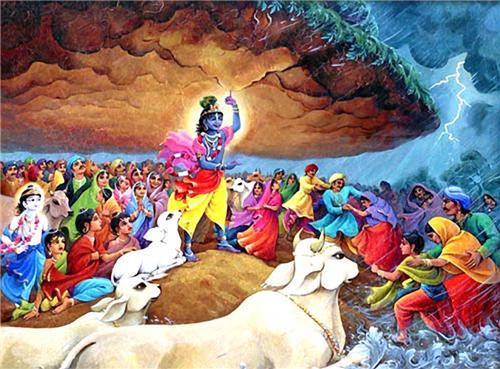 How Govardhan Parvat Got its Name

The name of Govardhan can be looked at in two manners. By merging two terms, it is formed. Gau (or Go- the name of cow in Hindi) and Vardhan. It means, a place where the cows can rest and expand their family as this Hill provides then soft grass, water and shelter in the form of caves. The other meaning is the spiritual interpretation Go in Sanskrit means ‘Senses’ or ‘Indriyan’ and Vardhan means, ‘to control’. Hereby, the meaning comes out to be the place where all the senses are in control and dedicated in the service of Lord Krishna.

Places of Interest at Govardhan Parvat 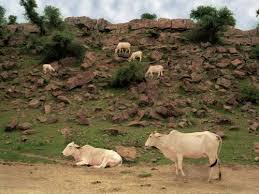 It is a hill made of sandstone and has a height of 80 feet and has 38 km circumference.

Krishnadasa, a devotee of Lord Krishna, compared Sri Govardhan Parvat with a peacock that turned his head to his stomach and when he compared, he said that his tail towards south is Poonchari ka lota, stomach in the middle and two legs in the form of Jatipura and Anyor and eyes as Krishna Kund and Radha Kund.

This place of great importance as it is the place where Lord Krishna Himself offered Shringar and Bhoj puja to Govardhan Parvat before He lifted it on His index finger. The history or the legend goes like this. Indra Dev or the Hindu god of rain was worshipped by the cowherd boys or the gwals and farmers for good rainfall in the season. In the Braj area, it was age long practice. As a child, one day Lord Krishna challenged this age old practice and stated that it was the duty of God Indra to shower rain whether one offered Him prayers or not. According to Him, prayers must be offered to Govardhan Hill instead of God Indra as it provided fodder and water for the survival of the cattle. All the gwals agreed on this point and did as they were instructed by Lord Krishna.

Now, Indra got furious and ordered his clouds to destroy Braj with rain and floods by bursting here. Since the rains got heavy, all the gwals decided to leave Braj area but on the proposal of Lord Krishna to stay here as Govardhan Parvat was around, they decided to stay. Through His Leela, Lord lifted the mighty Govardhan Hill on His index finger and all the living entities were protected as they got a shelter under it. The clouds continued to rain for almost 7 days until they got empty and at the same time, Indra’s pride was destroyed and he agreed to the point that till the time Sri Govardhan Parvat is there, no one has the capacity to harm the Braj. From that day, Govardhan Parvat is being worshipped as Lord Krishna Himself and Krishna came to be known as Indradaman and Govardhan Dhari.

Giriraj Ji or Govardhan Parvat is the hill that saved the lives of thousands of Brajwasis even when it rained continuously for seven days. It was here only that Sri Nathji appeared early in the 15th century. Whoever offered prayers with full devotion was granted whatever he desired. It is also believed that Shri Nathji played with His bhaktas. When the ornaments are removed after the Shayan Arati, Shri Nathji disappears in the hill. What all remains is the Govardhan Shila on which the ornaments and form of Shri Nathji was present. The devotees can experience their personal relationship with Shri Nathji and when their relationship matures into a lila alliance, Lord Sri Krishna personally appears in front of them.

How to Reach Govardhan Giriraj Hill in Mathura