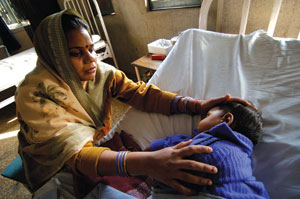 The holy city of Mathura is situated along the banks of the river Yamuna, in Uttar Pradesh, India. The nearest big city is Agra about 60 km away. Mathura is one of the most sacred cities and is the place of the birth of Lord Krishna. The place is visited by lakhs of devotees and tourists each year and the resident population continuously increases at a great pace with inflow of people from the surrounding areas in search of a livelihood. With its historic & religious background, the city attracts lots of low income people who are basically involved in street vending activities. The pressure on the city is very high for providing night shelters and public toilets in particular. The summers are extremely hot, the winters very cold which have a great bearing on the general health condition of this vast population.

Forty percent of the population of the city resides in slums which are more than 250 in number. No proper sanitation facilities exist. Hygienic community toilet facilities are almost non-existent and most slum dwellers have no access to toilets at all. The need to strengthen the infrastructure is most necessary to improve the general health and environmental status of the citizens.

Central, state and private sources are involved in providing the health care facilities. The services provided by the government agencies are identified as the ‘First Tier Facilities’ which include Urban Family Welfare Centre, Postpartum Centre and Medical Care Unit. The Second Tier Facilities include hospitals, district women hospital, dispensaries & one hospital dedicated to the defense personnel in the Cantonment. The nearest government medical college is situated in Agra.

There are more than 50 private nursing & maternity homes which are run on profit basis. One not-for-profit hospital is run by The International Society For Krishna Consciousness ( ISKCON) where medicines are distributed for the poor and needy free of cost.

The slums in general have no sewer line or storm water drainage facility. Municipal water has reached less than seventy percent in these slums and people rely heavily on hand pumps. There are inadequate studies available to correlate the disease patterns which arise out of poor environment and lack of basic civic amenities.

Bill & Melinda Gates Foundation, Family Health International along with a consortium of partners support the Urban Health Initiative, which is committed to improving urban health in Mathura.