Jai Guru Dev Ashram in the holy city of Mathura is the pilgrimage centre that attracts people from all over the world. This was constructed in remembrance of Pandit Ghurelal Sharma Ji by his disciple Baba Jai Gurudev. Baba Jai Gurudev’s early name was Tulsidas Maharaj and was a religious leader in the northern part of India and revered by both Hindus and Muslims as a Saint. He passed away in 2012 at an age of 116 (though the exact age is not known).

The architecture of Jai Gurudev Temple resembles that of the Taj Mahal being built with white marbles but if seen in close quarters one will notice the difference. This beautiful temple complex is made of domed structures and minarets entirely of white marble and based on Hindu architecture. This temple attracts various pilgrims throughout the year. 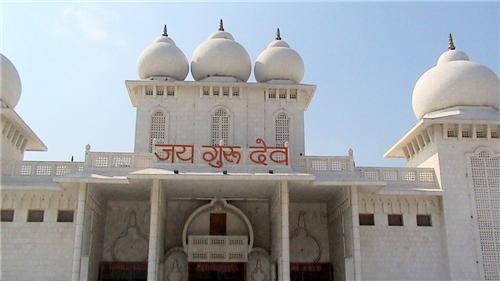 This temple is managed by the Jai Guru Dev Ashram and opens to public on all days from 7.00 a.m. to 7.00 p.m including the public holidays. They do not charge any entrance fee for this temple as well as donations are not compulsory. At the same time, they do not accept donations from non-vegetarians which make it a unique temple. Pets are neither allowed in the ashram nor in the temple. The pilgrims who want to undergo spiritual course could stay in the ashram. This temple is open to entire human race across the world devoid of their caste, creed and religion. It is the true representation of the entire humanity.

The only God of this temple is Jai Gurudev that would liberate the human being from its rotation of birth and death. It is hoped that this name would bring friendship, affection and peace among the people all over the world and bring the spiritual upliftment among them. Baba always insisted that people should eat natural vegetarian food only which would make their thoughts clean, soft and pious. When one eats non-vegetarian food their mind would be defiled with the intake of flesh and blood of other species. He also advocates his disciples to be non-alcoholic to preserve the cleanliness and piousness of the temple.

The Ashram also runs a charitable trust which caters to the poor and needy people by providing free education and free medical assistance. It also works for the upliftment of the poor people. The temple also organises “Bhaandara festival” every year where they cook food and distribute it among the pilgrims and the poor.

Mathura could be reached directly from Delhi or Agra via train which cost about Rs 100/- for one way. You can also reach Mathura via Roadways. For local visit, it is ideal for one to either go by foot or take a cycle rickshaw. One can also hire a private vehicle to travel around the city. It is always ideal to stay in Mathura where you will find good quality hotels at an affordable price.

It is ideal to visit during October to March when the weather is pleasant and several festivals are celebrated. Various tour operators also offer packaged tour that suits your budget and will cover all the aspects of your travel and your mind is free of these petty things and concentrates on the spirituality.

As Mathura is a spiritual city, it is ideal place for a pilgrimage and could cover all the temples of the city. Apart from the temple, one can also visit the Archaeological Museum and some of the Tirthas or Ghats, Goverdhan Hill, Kusum Sarovar, Gokul and Mahaban. All these places are related to Lord Krishna’s childhood days. Also, don’t miss out on Rama-Reti, the two inter-twined tree in black and white which is believed to be Lord Krishna and Balarama. Hence, called as Krishna-Balarama Tree.

Apart from treating your spiritual desires, one can also treat their stomach with various delicacies especially made of milk as Mathura is the “land of cows”. One can also visit the local markets for shopping all kinds of pooja items like scented incense sticks, prayer beads, incense holders, devotional CDs, idols of gods and goddesses, religious books, pendants etc.

Like all other hindu holy towns of India, Mathura is also prone to chaos and squalor. Beware of high demanding priests, monkeys adept in stealing your glasses, bags or cameras.