Mathura, the Braj Bhoomi is not only a sacred place for Hindus but also for Jains. Jain Chaurasi Temple in Mathura stands as a proof to this. This has been constructed in memory of Jambu Swami, who attained nirvana at the age of 84 in Mathura.

Mathura the pilgrimage city is sacred place for all major religions of India like Hindus, Jains, Buddhists, etc. Situated on the banks of River Yamuna, this holy city apart from being the birth place of Lord Shri Krishna is also the place where first Kevali (a tirthankara who preaches and establishes Jain doctrine and order) Anantvirya Bhagvan Bahubali started the Moksha tradition in the chaturtha kaal. He was followed by all the 24 tirthankaras who attained moksha or nirvana through the path for salvation. 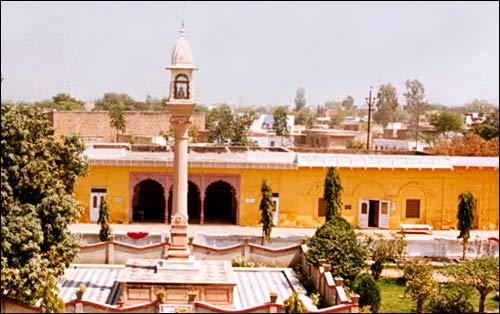 Jambu Swami was the last Kevali of Chathurtha Kaal. He belongs to Vaishya Vanshiya and attained nirvana, when he was of 84 years, in Mathura which was encircled by 84 forests in those days. From that day onwards this place was called as Chaurasi which in Hindi means 84 and has become land of peity for Jains. This place was established during the 7th teerthankar Shri Suparshwanath Bhagawan. It is said that the artistic and beautiful stoop (pillar) along with the idol of moolnayak Shri Suparshwanath was placed by Kubera Devi who appeared in front of Dharmaruchi and Dharmghosh, the munis whose hard prayers have made her happy.

Apart from the Pratima of Ajithnath Bhagwan and the charan of Jambu Swami, the temple also has shrines of Neminath, Parasnath and Mahavir Bhagwan. The statues of first Kevali Bhahubhali and the antim Kevali Jambu Swami add glory to the temple. These two statues are placed to face each other.

Though many of the monasteries and temples were destroyed by Mughal rulers, some of them stand still and attract pilgrims from every nook and corner of the world. One such temple is Jain Chaurasi Temple in Mathura which is one of the few places of worship of Jain culture and faith in Mathura. This temple is located on the banks of River Yamuna and near a forest. The temple has colourful paintings and inscriptions on the walls portraying the Jain culture and art. There is a big hall in the main temple which can simultaneously hold up to 500 people during pooja and aarti.

The temple hosts 2 dharamshalas which has a total of 60 rooms. These rooms contain all the modern amenities to cater to the needs of the pilgrims. A bhojanshala is also available in the temple.

This temple is also surrounded by a large beautiful garden and has a bird sanctuary to the left of the main gate.

How to Reach Jain Chaurasi Temple

Road: This is located on Delhi-Mathura National Highway 2 and 4 km to Mathura. Temple, statues and entry gate are all visible when you travel by road. In case, you are travelling by bus, get down at Govardhan chauraha (1 km to the temple and has a road to reach Govardhan and Krishna Janmabhumi) and take a rickshaw to reach the temple.

Railway: Mathura railway station is the nearest which lies on Delhi-Mumbai railway line and all trains stop here. The temple at a distance of 5 km from the railway station.

One can also stay in the hotels of Mathura and can reach the temple by local transport. Some of the hotels and travel agency offer packaged tour to the city. There is no doubt that one will enjoy the hospitality of people of Mathura, delicacies, handicrafts, clothes, etc of Mathura will make their pilgrimage to Mathura a memorable one.

Mathura, the Brajbhoomi where Jain Chaurasi Temple is located is a sacred place for the followers of Jainism as well.