Mathura, the pious city for the devotees of Lord Krishna needs no introduction. Situated at the west bank of river Yamuna, it is an important place for pilgrimage tourism.

Although famous for its temples, one of the main attractions of tourists in Mathura is Jama Masjid. It is very popular place of worship for Muslims as well as other pilgrims coming to this region. Jama Masjid Mathura was envisioned and constructed by Abd-un-Nabi Khan or Nabir Khan, as he is commonly known, in 1661. He was the Fauzdaar of Itawa at the time when Aurangzeb ruled Delhi. Later on, he was transferred to Mathura, where he built this renowned mosque. 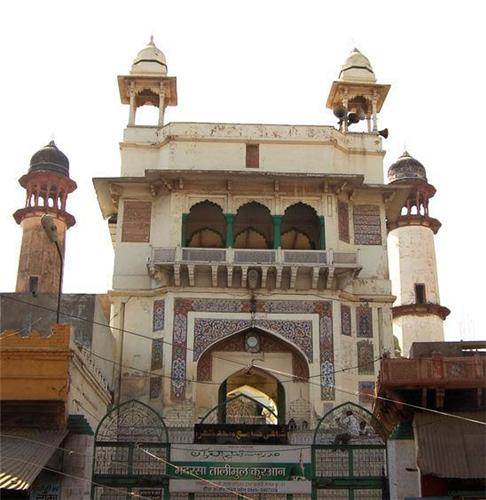 Abd-un-Nabi Khan bought the site from butchers and the rest was obtained from few Kazis. The descendants of kazis still reside there at Kusk Mahalla, the only place in Mathura which is known by a Persian name. It is also said that it is built on the site where Govind Dev Temple was built, but by the orders of Aurangzeb, it was mutilated and the idols of gods and goddesses were buried in the ground. The masjid is representative of mughal architecture which consists of four minarets that are intricately decorated. The mosaic plastering on these minarets are vibrantly colored and few panels having this plastering still exist which has faded-colored plaster mosaic.

The Mosque is just adjacent to Krishna Janmabhumi complex, which adds other attraction to this place as it becomes a visiting place for both Hindu and Muslim tourists. It witnesses huge turnout of devotees on all days belonging to both communities. The Mosque can be reached by auto, rickshaw or buses. One note of precaution: pets are strictly prohibited here. Also one should be careful with personal belongings as the place is covered with barbed wire and has armed police on the entrance gate.

Best time to visit is Feb-March, near the festival of Holi, or in winters (October to December), when the weather is pleasant.

Where to Stay Near Jama Masjid

Mathura city hosts plentiful of Hotels which suits all budgets. Hotels are near Railway Stations as well as Bus Stand. One can easily find Hotels near Jama Masjid also. Budget Rooms start from as low as Rs.499 per night while deluxe room costs somewhere around Rs. 1200 to 3500 per night for a double room as per the facilities offered by them.

From Mathura Junction Railway Station, the distance is approx 56 km to Jama Masjid. One can easily find an auto-rickshaw or a bus. The route is to move 180m west from Mathura Junction Railway Station and then turn right on Hathras-Mathura road or SH-80. After covering distance of 1.5 km, at Chandra Software Technologies turn towards right and after 350 km of travel take left turn toward Junction Road. Next turn is after 30 m towards left at SR Computer Annexe. After around 1.8 km one has to turn right at Chowk Bazar where the Jama Masjid is located.