Mathura, the most sacred place for Hindus is famous as the city of temples. Most of the temples here are related to Lord Krishna and his various forms. There are a few temples which are dedicated to various goddesses or ‘Devis’. 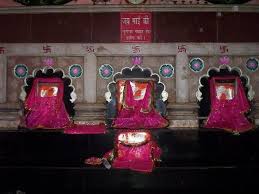 Kankali Devi is related to the divine birth of Lord Sri Krishna. The name of goddess Kankali Devi appears in several religious stories including Vishnu Purana, Krishna Katha and Bhagwad Gita. The Devi was called Kans Kali years back, but later on, the name was distorted gradually to become Kankali Devi. According to the sacred beliefs, the people of Mathura were suffering very badly due to injustices of Kansa, who was Devaki’s brother. A prophecy announced that the eighth child of Devaki would end Kansa.

Kansa was terrified and had put Devaki and her husband Vasudev in prison and waited for the birth of her eighth child, killing all other infants born in between. The seventh child, Balaram was saved miraculously and when Lord Krishna was born as eighth child, Vasudev carried him to Gokul to his friend Nand’s village so as to save him from his maternal uncle and there he exchanged his son with Nand’s and Yashoda’s daughter and came back. When Kansa was informed of the birth of eighth child, he rushed to the prison, but was surprised to find a baby girl. Nevertheless, he thought it as a plan to kill him and decided to kill that baby girl.

Kansa threw the girl on a rock and tried to kill her but she escaped and flew in the sky. She announced the birth of eighth child and also declared that he will be killed in a very short period. She then disappeared and since then, this place is known as KansKali or Kankali.

This place is also important as an archaeological site. The Archaeological Department of India has excavated the whole area and several statues and idols found from this place are placed in various museums in and around Mathura. It is evident that there were ancient stoops and several other temples such as Temple of Kubera Devi were existent here. Ancient Jain statues were also excavated and remnants of maths belonging to Budha and Buddhism. The place was largely destroyed due to the attack of Huns in the region. The deity of goddess erected here during this period is one of the four most important goddesses of Mathura.

There are some dharamshalas near Kankali Devi Temple, but it is better as a tourist or pilgrim to stay at Hotels in Mathura. Here one can easily found accommodation of convenience in various guest houses, hotels and government hostels.

Auto or cabs can be easily hired for this temple. Rickshaws are also available. Hotels also arrange for visit to this place if asked for.