Mathura, the holy city of Hindu also has a temple for Lord Shani Dev in one of its dense forests and the temple is called Kokilavan Dham (Shani Temple). When Lord Shri Krishna was born, all the devas visited Nandgaon to see and bless baby Krishna. So, Shani Dev also visited Nandgaon but Yasoda, the foster mother of Lord Shri Krishna did not allow him to see the baby Krishna as she was scared that seeing Shani Deva will bring bad luck to her son. 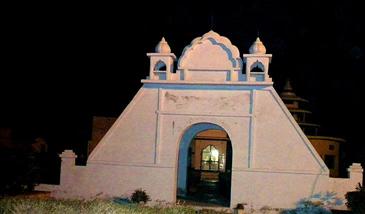 This made Lord Shani Deva upset and he stayed in the forest near Nandgaon and performed hard penance. He was very curious about him not being allowed to see baby Krishna as he punished humans for their karma and thereby he is doing his duty only. He was also upset of him being called as a cruel god. Lord Shri Krishna who was moved by his penance made the place where he met Shani Dev as his temple and also said that the people who visit Kokilavan Dham or Shani Dev Temple Mathura would be freed of all their troubles.

The ancient and the famous temple of Shani Dev is situated in Kokilavan Dham at Kosi Kalan which is around 10 km from Mathura, Uttar Pradesh. The temple is located exactly at the place where Lord Krishna gave darshan in the dense jungle (van) and also has the shrine of Barkhandi Baba, guru of Shani Dev. Another legend is that Lord Krishna, when he was a teenager, used to visit this forest and used to play on the music which attracted the gopis. Once they arrived, he would transform himself as a Cuckoo, which is known in Hindi as Koyal otherwise called as Kokila. Hence, the forest is named as Kokilavan meaning Cuckoo’s forest. 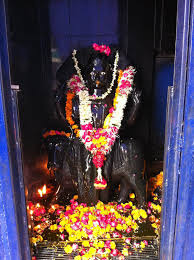 Kokilavan Dham is approximately in 20 acres area. Apart from being the temple of Shani Dev, it also has temples of Giriraj Temple, Guru Barkhandi Baba, Gokulesh Maharaj Temple, Sri Dev Bihariji Temple and Navgraha Temples. There are also two large ponds and a cow shelter (Goshala) in the complex. It is the only forest that exists today in the braj bhumi.

Apart from the daily pooja and aarti, Saturdays and Shani Amavasya are special days for the temple and pilgrims pour in during these days. Janmashtami and Holi are also celebrated in a grand manner. The temple also houses deities of Radharani and Shiva.

How to Reach Kokilavan Dham

Kokilavan Dham is situated some 10 km from Kosi Kalan, a town in Mathura. The town was named kosi as it was the treasury of Lord Krishna’s foster father Nand Raja as Kosh means treasury and it is also said that this town got its name after Lord Rama’s son Kush. Kosi is a commercial and cultural hub in Uttar Pradesh and situated on the Delhi-Agra National Highway 2 and some 100 km from Delhi. It has many hotels and rest houses for the travellers to stay and visit the temples around as well as to relax. It could also be reached by Rail, the Kosi Kalan railway station being the closest one. There are various trains from Mathura to Kosi Kalan. For those who want to reach by air, the closest airport is Delhi and from there one can travel by road to reach this temple. The ideal time to visit Kokilavan Dham is from October to March.

Apart from the temples, one can also go for adventure sports like river rafting, sport fishing and boating in the lake in Kosi.

Being the very ancient and famous temple for Lord Shani Dev, Kokilavan Dham Shani Dev Temple is visited by pilgrims from all over the world who seek the blessings of Lord Shani Dev to lead a trouble free and peaceful life.