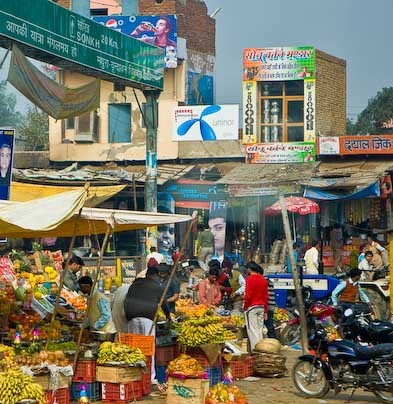 It is among the major localities of Mathura which comprise of the huge crowd of the city and has train connectivity along with railway station. There are several hotels and other residential places which suits the every budgets of visitors.

This is the best known market in Mathura city which is in existence from the ancient time. It is the place where shopping of jeweleries, handicrafts and milk products can be done. It is also known for the delicious food items along with stuffs such as thandai, chaats, lassi and milk badam. Apart from this there are several shops which offer complete shopping facilities for all the necessary stuffs. This place is a populated place where tourists come to visit entire year.

It is the known tourist place and the area is surrounded by temples, education institutes, hotels etc. This area attract tourists and is among the crowded area of Mathura.

This is also among the known tourist place and attract visitors from outside. It is the best sightseeing area which is covered by famous temples. Basantar park, Nidhivan park, Gita Mandir, Lal mandir are the known places to be visited in this area.

This is the oldest place of the Mathura city. It is known as the native inhabitants for the people of Mathura and is the crowded place of the city. It has residential buildings, schools and colleges. Several new buildings are also in underconstruction in this area.

It is the outer part of the Mathura city and is a nagar panchayat of this city. This area is developing t a steep rate and new residential and commercial buildings are constructed every year.

It is the nearby village of the Mathura which is now known as the part of Mathura and the is among the tourist attracting place.

This is the plush and highly developing area of the city where residential and commercial buildings are constructed. This area is know for its famous schools and colleges.

This is the newly-constructed expressway which connetcs Mathura with Delhi and Agra. The area surrounding this expressway is now developing and is the main investment area where several investors have invested to setup their industries due to better connectivity with the major cities of the India.

This is one of the attracting area of Mathura. It is the place where several luxurious hotels are located along with the residential buildings. It has huge crowed of the tourists from all over the world. It is located in the central part of the city and is the best renowned places of the city. It provide choices among the tourists regarding their accommodation as hotels of different types are available here. It is the economic are of the city.

This is among the best areas of the city which is currently owned by the Indian Army. This area is know for the military residential in the city. It is the outer part of the city which has contributed a lot in the city expansion and development, because of the military residential the areas surrounding the cantt is growing at steep rate and several new buildings are constructed.

This is the renowned place of the Mathura city which is the attraction of the pilgrims along with local people of the city for shopping purposes. This market has all the variety of shops where every items can be purchased. Tourists visit here to purchased expensive and religious items.

Janam Bhumi holds the historic importance in the birth of Lord Krishna. This place is known as the exact place where Krishna was born in the prison cell, which is also known as the "Garbha Griha". On the same place of birth a temple is built. This place is always the attraction point of the pilgrims and tourists from the entire India during the time of festivals.

The area of Vishram Ghat is known as the holy bath and worship place. This is the main Yamuna ghat in the Mathura city. This ghat is made up of marble stone. It is the perfect seightseeing area in Mathura where several famous temples are located such as Mukut Temple, Yamuna-Krishna Temple, Langali Hanuman Temple, Radha Damodar Temple, Narasimha temples, Murli Manohar Temple and Neelkantheshwar Temple.

The address of the ghat can be found below.
Vishram Ghat, Kinara Road, Gol Pada, Mathura, Uttar Pradesh - 281001