Mathura, the Janmabhoomi of Lord Shri Krishna is connected to all aspects of his life as he spent his childhood there. Mansi Ganga Tank in Mathura is also connected to Lord Krishna’s yet another aspect of life. It is situated on Govardhan which is 26 km to the west of Mathura. 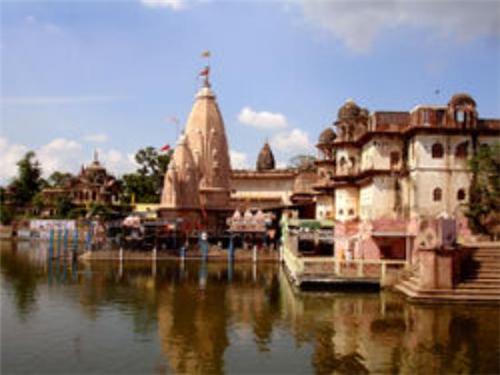 Mansi Ganga Tank is a large masonry lake situated in the center of Govardhan town. It is believed that Lord Shri Krishna’s foster parents, Nand and Jasoda wanted to take a holy dip in River Ganga but the residents of Brij did not want them to go to such a faraway place. They were all wishing that somehow Mother Ganga should come to their place. Lord Shri Krishna got to know about their wish and he meditated and brought River Ganga to Govardhan in the tank. Since he brought it through his mind (meditation), it is called as Mansi Ganga Tank. Lord Krishna’s parents and all brijwasis took holy dip in this tank and also saw Mother Ganga riding on her crocodile.

Another story goes thus that Lord Krishna after killing a demon called Vatsasura who was sent by Kamsa to kill Lord Krishna in the form of a calf, he was advised to take a holy dip in River Ganga to get purified. Lord Shri Krishna, who did not want to go all the way to the Ganges, brought it in this tank through his meditation. Thus, the lake got the name of Mansi Ganga and is also considered to be more powerful than the holy Ganges itself. Hence, taking a holy dip in the lake would relieve one of their sins and purify them.

All those who go for the Govardhan Parikrama start it at the Mansi Ganga Tank and end it there as it was because of Lord Shri Krishna that the lake came into existence. This tank has also been mentioned in the “Mathura Mahatmiya” where it is said that taking a holy dip in this tank would give people Lord Shri Krishna’s blessings and divine love. It is also believed that Lord Shri Krishna and Radharani used to go for a boating in this lake.

Mansi Ganga Tank in Mathura is a humongous lake and people are allowed to bathe here. It is quite surprising to find water in the tank even during the very hot summer season. Its enclosures and steps were built in 1637 by Raja Bhagwan Das of Amer and adorned by Raja Man Singh. The water here is very hard and it is better for one to take a holy dip (not bathing with soap or shampoo) either on the steps of the lake or in the separate enclosures available for men and women. This way one can also have a safe dip in the holy water as well as maintain the sanctity of the lake.

The Brajmandal Parikrama which also includes Govardhan Parikrama would be incomplete unless you take a holy dip in the Mansi Ganga Tank in Mathura. This tank is illuminated with lights during the festivals like Janmashtami, Deepavali and Holi and offers a spectacular sight for viewing. There is also a legend that says that the lake is shrinking along with the Govardhan Hill.

Govardhan is situated 26 km to the west of Mathura on the state highway to Deeg in Uttar Pradesh. This small town is perched on a narrow sandstone hill called Giriraj and is 8 km in length and of course an important pilgrimage centre for Hindus.

Govardhan is connected to other main cities like Delhi, Lucknow, Mathura and Agra by roadways. Agra is the closest airport and the Mathura Junction Railway station is the closest railway station. People living in Govardhan are called “Brajvasi” and are mostly vegetarian. They also have rich cultural heritage. The food is very delicious and costs less. You may not find ideal accommodation as it is a small town.

Hence, it is ideal to stay in Mathura city and to take a cab or taxi or any local bus to visit this place. Take a Holy dip in Mansi Ganga Tank in Mathura as part of your Brajmandal Parikrama and obtain Lord Shri Krishna’s divine love and blessings.