Mathura in One Day

Any tour itinerary to a famous town, a pilgrimage site or a historical location cannot be planned within the confines of time and limitations. However, trying to accomplish this is the most fascinating part rather than missing it out altogether. Not only does it provide the immense satisfaction of crossing it off a ‘must-see’ list; it also opens the eyes and mind to new perspectives and experiences.

For the more adventurous, certain travels and itineraries have been made popular by the concept ‘more in less’, which means you can pack in as many visits as you can in the shortest time possible.
Likewise, a trip to Mathura is usually fashioned around a quick day trip that departs from Delhi and includes Agra, Mathura and Fatehpur Sikri in whirlwind visits before arriving back at the starting point. It may not be a bad idea but it takes away the most important aspect of a visit or trip – enjoying at leisure! 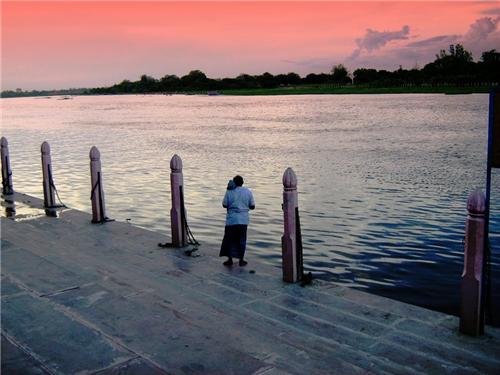 The twin cities of Mathura-Vrindavan, made famous historically, culturally and most of all, religiously are places that offer deep fascination to the faithful. Filled with temples, religious sites, folklores and legends, this area on the banks of the Yamuna RRiver, has traversed the timeless bridge between the ancient and the modern.

The earliest records of Mathura’s history shows it as a place where Buddhism flourished indicated by the presence of many Buddhist monasteries, now lying in ruins. As can be seen from the writings of the Chinese travellers Fa-Hien and Hiuen Tsang, Buddhism was integral to Mathura’s growth as a religious and cultural centre and received great patronage from the great Mauryan emperor Ashoka who embraced the ideals of Buddhism and moved away from the concept of war and annexion of territories.

From the 1st century BC to the 5th century AD, Mathura flourished as a centre of trade, commerce and the arts. The Mathura School of Art, which gave rise to stone carvings and sculpture depicting Buddhism existed during this period.

Ptolemy says that the Greeks who came later, called it ‘Madoura Theon’ (Home of the Gods). In 78 AD, Emperor Kanishka ruled over this area and Mathura’s fame to glory first began with the rise of the Indo-Bactrian Kushans. With the advent of foreign invaders and empires, this slowly declined
to arrival of Krishna and the age of the Mahabharata saw Mathura’s rise to fame as a centre of Hinduism, that held sway over most of the region till the 16th century.

However, for most of the 16th and 17th centuries, the constant overrun by invaders from Persia, Afghanistan and the later Mughal emperors, sounded the death knell for Mathura; it was ravaged and left in a state of decay. After Aurangzeb burned and destroyed the temples and monasteries and built mosques in their place during his reign from 1657 to 1707, Mathura was reduced to rubble in 1757 during the great carnage inflicted by Ahmad Shah Abdali.

Mathura re-emerged from the ashes like a Phoenix after it was re-discovered by Chaitanya Mahaprabhu and is today regarded as the greatest centre of Vaishnavism.

One of the most important points to consider while undertaking a journey is to get to know the ‘lay of the land’, which is to say that the geography of the land has to be understood. Mathura is a dusty little town overrun with temples, ashrams, boarding places, and many businesses that thrive off the land during the in-season and the off-season. Having sufficient information in hand or taking the help of a trusted guide, is added advantage.

Places to Visit in Mathura

This site marks the poignant tale of the birth of Krishna in a prison cell where his parents Vasudev and Devaki were held captive. The history of violent clashes between Hindu and Muslim cultures and the uneasy truce that exists today is highly visible by the presence of armed guards and the barbed wire that separates the temple from the mosque adjacent. The original temple, the Kesava Deo Mandir was destroyed by Aurangzeb and a mosque constructed over the site. Mathura’s rediscovery and its rise as a centre of Vaishnavism is marked by offering prayers at this place. Krishna’s birth in captivity on a dark, rainy night when the Yamuna was in full flow holds symbolic and metaphoric significances to life’s own lows and highs.

Visitors to this temple have to be aware that security is very tight; they must declare personal belongings and will have to pass through a metal detector.

Rangbhoomi is the site of the wrestling arena where Krishna duelled and killed his wicked uncle, Kansa and reinstated his maternal grandfather Ugrasena to the throne.

Vishram Ghat the most famous of the 25 ghats that surround Mathura because this is the place where Krishna rested after bathing in the river and cleansing himself of the blood of Kansa. Perhaps best illustrated by the fact that the parikrama of Mathura’s ghats begins and ends here. The evening aarti where lamps and lit and set afloat in Yamuna is a warming sight.

Built in 1814, the temple is an example of modern architectural brilliance in the heart of this ancient city. Dedicated to the ‘King of Dwaraka’ Krishna, this temple is managed by the Vallabh sect, followers of saint Vallabacharya.

Kusum Sarovar, this 450-feet-long tank with a depth of 60 feet and flights of stairs on all sides, is one of the most striking tourist attractions of Mathura. The Kadamba trees surrounding this sarovar emphasize the significance; it was on a Kadamba tree that Garuda rested while flying away with the ‘amrit kumbh’ (pitcher of nectar) after the Samudra Manthan (Churning of the Ocean).

Mathura Government Museum houses the finest and rarest items of archaeological significance, depicting the Gupta and the Kushan dynasties between 400 BC and 1200 AD, the Museum is an interesting place to visit, especially for students of Indian Art and Iconography.

These places have been listed, not in any order of priority or significance. Visitors are advised to take the help of authorised guides or better still, use a city map of Mathura with these locations so that they spend less time travelling to and fro and more time enjoying the sights of these places.

There are several other temples around Mathura; most of these visits comprise the itinerary for Vrindavan and Braj Bhoomi and so a separate visit itinerary is required to complete the entire tour.

However, if visitors who allocate an entire day to sightseeing in Mathura find themselves with some time to lose after visiting these places, they could perhaps make a visit to Fatehpur Sikri or Bharatpur Bird Sanctuary. Fatehpur Sikri is best visited in the morning time and sighting of birds is better in the evenings when they ‘come home to roost’.