Mathura city is situated on seven hills and surrounded by various forests (vans) and water bodies (kunds). It is believed that during the mythological age, there were 159 kunds existed in and around Mathura. Of which, Potara Kund in Mathura is quite famous as it was here that Lord Shri Krishna’s baby clothes (potre) were used to be washed.

The Hindus holy city of Mathura lies on the banks of Yamuna River and as the legend goes it is surrounded by various mountains, forests and water bodies. Lord Krishna who was born and brought up in Mathura is believed to have played in these forests and water bodies. Only four kunds are in existence now. They are Potara Kund, Shiv Tal Kund, Balbhadra Kund and Saraswathi Kund. 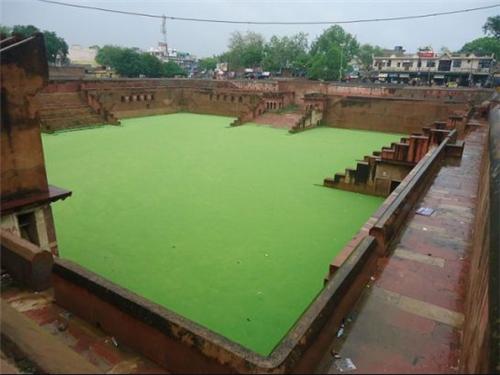 Potara Kund is located in the centre of the Mathura city near Sri Krishna Janmabhoomi. It is in this kund Lord Krishna’s clothes were used to be washed. The Potara Kund in Mathura is also associated with young Krishna’s childhood pranks. It is also said that it was earlier used to be called “Pavitra Kund” which means pure but over the period of time it is changed to “Potara Kund”. It was also the bathing ghat for Devaki and Vasudev and Devaki’s clothes post delivery of her sons used to be washed here. Hence, it attains significance.

Potara Kund in Mathura is water enclosed area and was considered to have built during the epic period of Mahabharata. It is made of red sand stone with stairs to get to the water in the kund and is built according to the old Hindu architectural style. The Potara Kund Mathura is surrounded by many magnificent temples and shrines of Hindu gods and goddesses. These temples and shrines are also believed to have been built during the epic period.

The water in the kund is also considered to be very holy and pilgrims used to take a holy dip in it by using the stairs. The holy water of Potara Kund is also used for all the auspicious activities. Inside this complex, the Goddess “Maa Sati Shakthipeeth” otherwise called as “Uma” is located which is being guarded by its "Bharav”. It is also closer to Sri Krishna Janmabhoomi Temple. Apart from offering prayers, one can also just sit on the steps and relax in the peaceful and serene atmosphere.

Pets are not allowed and is open to the public on all days including the public holidays from 7.00 a.m to 7.00 p.m. Today, this site is beautifully maintained and well preserved by the Archeological Survey of India. As it is closer to Sri Krishna Janmabhoomi, it is easily reachable by auto rickshaws, buses or tongas. One can stay in Sri Krishna Janmabhoomi temple dharamshalas. The ideal season to visit is from October to March. When you go in for the packaged tours, then you can cover all the places at cost effective rates.