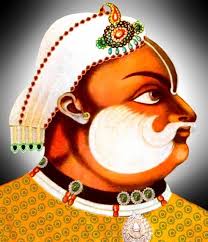 Mathura is well-known place for all Krishna devotees. Several Mandirs, ghats and other tourist places attract tourists from far and wide. Out of these, Raja Bharatpur Palace in Mathura adds another dimension as an historical place in this religious city.

Raja Bharatpur Palace is a grand and extended monument of olden times. It was built somewhere around mid of eighteenth century by Maharaja Suraj Mal of Bharatpur.

Raja Suraj Mal was the eldest son of Badan Singh. He was born of Rani Devki belonging to Jat family from Kama in February 1707. During his reign, Jat Kingdom extended to Agra, Mathura, Deeg, Bharatpur and touches some part of Maratha kingdom. He was a great builder and built many magnificent forts and palaces, top of which is the Palace of Deeg which is considered as incomparable to any other palace. He also built many temples at Mathura, Vrindavan and at Govardhan. Due to its proximity to Bharatpur, Raja Suraj Mal also built a palace at Mathura which is known as Raja Bharatpur Palace. He spent crores of rupees on artifacts and architecture decorating walls, ceilings and courtyards of these palaces.

This palace presents an artistic mix of Rajput art with Mughal architecture. Its apartments are very intricately carved and have mosaic flooring which is vibrant and depicts a typical chess board flooring. The whole mansion exhibits excellent craftsmanship.

The main hall in the center of Palace has been converted into a museum where royal artifacts and articles are displayed. These include many beautiful objects that date back to second century but still are in very good condition and represents the royal elegance in front of visitors. The courtyard of the palace is used as a small restaurant where one can sit in the royal ambience and enjoy quite tea or snacks.

The entry is restricted in the palace and you have to pay a small amount to visit the museum. Pets are not allowed in the premises of Palace or museum.

When to visit: Best time to visit is in winter season when temperature is not extreme and humid. It will be good idea to visit the palace during the months of October to March.

Where to Stay: There are not many good places to stay around the palace, so it is best to stay in hotels in Mathura.

How to Reach: Raja Bharatpur Palace can be approached either through taking a cab or auto from Mathura Junction railway Station or Bus Stand. Hotels also arrange vehicles for these places so one can ask to the hotel staying in. Buses are also available from Mathura bus stand to the palace.