Mathura is among one of the holy places and associated with the stories of Krishna's childhood activities. It is the best place where pilgrims can acquaint themselves with the religious heritage of this country. This city is the birth place of Lord Krishna and spent major part of his life in this city as mentioned in the renowned Hindu epic of Mahabharata. Further, this is the only holy place that is situated along the shores of Yamuna River. Mathura has its importance both in the Indian history as well as in mythology. Mathura also holds the importance in the Buddhism religion, as during the Mauryan period this was the centre for Buddhism. 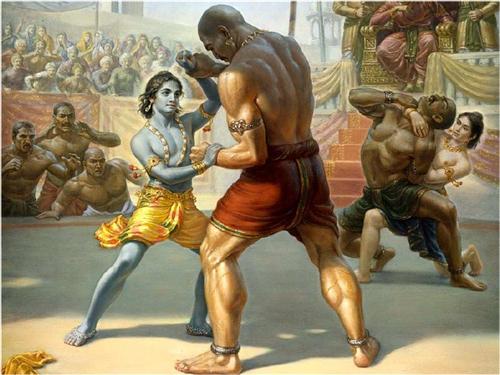 This can be extracted, as the area of Rangbhoomi is surrounded by several Buddhist style structures and buildings that were built during those days. After the decline of Mauryan dynasty, the significance of this place as Buddhism also came to an end and Hinduism became more dominant. Mathura is known for the beautiful temples and shrines that are associated with the birth of Lord Krishna. The temples along with Rangbhoomi attract several tourists from all over the world to visit this city and is easily accessible by tourists due to the well connectivity of this city with rail and road to the other major cities of India.

Rangbhoomi is situated opposite to the post office in Mathura. This place is known as the wrestling arena where the dual fight between Krishna and his maternal uncle Kansa took place, Krishna defeated and killed his maternal uncle. After the win Lord Krishna freed his parents and reinstated his maternal grandfather to the throne of Mathura. It is said that Kansa had imprisoned his sister Devaki and her husband after the forecast that their seventh son would lead him to downfall and his death will be by his hands. Therefore, this place holds the importance in history and is a place of worship.

As per the history of Rangbhoomi Krishna and his elder brother Balarama came to Mathura and went to the wrestling arena. Here Krishna faced tough competition from Canura who was among the famous wrestlers of Mathura, however, defeated him at the end. His brother Balarama fought with Mustika. Residents of Mathura and Kansa watched this wrestling. Krishna and Balarama fought intensely for some time. The Canura severely attacked Krishna on his chest, but Krishna did not get disturbed by this attack, after this Krishna holds the hands of Canura and started rotating him and he died due to centrifugal force. On the other hand Balarama attacked Mustika with a great force and Mustika trembled and fell on earth with blood vomiting and died due to this. Furthermore, there were several other wrestlers who came to fight with Krishna and Balarama such as Kuta, Sala and many more, however, all of them were killed by Krishna and Balarama. After them Krishna killed Kansa and freed the people of Mathura from the injustice and cruel ruler.

Therefore, the Rangbhoomi is basically associated with the wrestling part of Krishna's life in Mathura while freeing his parents from the captive of his maternal uncle Kansa. This is a beautiful place to visit and enjoy during holidays with family.