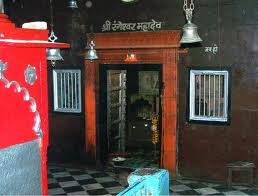 Rangeshwar Mahadev Temple is a beautiful stone temple that is situated on the southern part of Mathura. This temple is dedicated to Lord Shiva as it has the Shivalinga that was worshipped by King Kamsa, maternal uncle of Lord Krishna. In this temple, Lord Shiva is referred as Rangeshwar Mahadev. It is also believed that Lord Shiva is the protector (Kshetrapalaka) of Mathura city. Hence, this temple was built. The temple is full of beautiful paintings from the Hindu mythology and is an amazing example of Hindu architecture.

It is said that Kamsa conspiring to kill Lord Shri Krishna and Balram had arranged for Akrur to bring them from Nand-Gokul to Mathura on the pretext of sightseeing Mathura. Kamsa had built a wrestling arena called “Rangashala”. On the day before the wrestling match, he offered pooja to Lord Shiva in this temple. On Shivratri, the wrestling match was organised and Lord Shri Krishna killed Kamsa. On seeing this, Lord Shiva has become overjoyed. Thus, Lord Shiva got the name as “Shri Rangeshwar Mahadev” and the temple is known as Rangeshwar Mahadev Temple. Every year on Kartika Shukla Dasami, a day before devottana ekadasi, the Chaube community organises a festival in which a 30 foot Kamsa will be killed by Lord Shri Krishna. 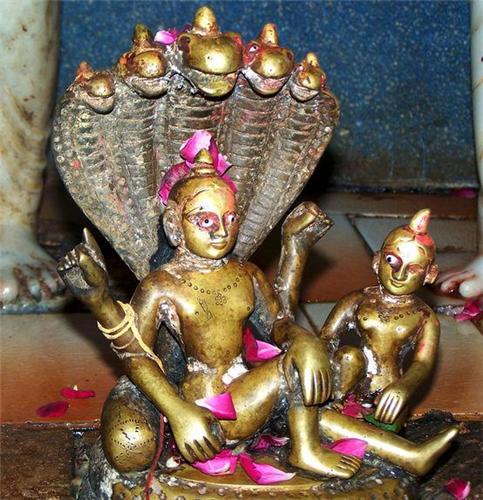 The temple is opened to public on all days from 6.00 a.m. to 7.00 p.m. Of course, pets are not allowed and being a spiritual centre, cameras and mobiles are not allowed. In most of the temples locker rooms are available where you can keep your valuables and take them back once you complete pooja. Also, beware of monkeys that are trained to steal your valuables from you. Apart from daily pooja and aarti, Shivratri is celebrated as it is not only the special day for Lord Shiva but also on that day only Kamsa was killed.

Rangeshwar Mahadev Temple in Mathura is located on Holi-Gate-Tank Choraha Road, Maghora in Mathura and is also near to the Kans Qila. If you get to Mathura, it is easier to reach this temple. Mathura is 50 Kms to the north of Agra and 145 kms to the south of Delhi. Being famous pilgrimage centre of India, it is being thronged by people all over the world. Hence, it is well connected by Railways and Roadways as all the major expresses and trains stop at Mathura and also being on the National Highway 2, it could be reached by any forms of road transport easily. The closest airport to Mathura is Agra airport, from there one can utilise the services of public and private transporters. Once you get to Mathura city, you can take the local bus or cabs or taxis or auto rickshaws to reach the temple.

Though one can stay in the dharamshala of Rangeshwar Mahadev Temple in Mathura, it may not be a luxurious one. Hence, one can book their accommodation in various hotels that are available in the Mathura city according to your budget. Some of the hotels and tour advisors offer a packaged tours where all these are covered. Hence, you can concentrate on the main purpose of your visit the spiritualism.