Mathura is known as the city of various popular Hindu temples. This city is covered by various popular Radha Krishna temples along with some temples specially dedicated to Krishna's elder brother Balaram and Lord Shiva. The temples in Mathura have their special popularity in the heart of Hindu pilgrims and those temples are visited frequently on every festivals and fairs of the city. Offering prayer and aartis in the temples have special tradition and beliefs in the people of getting the blessing directly from Lord Krishna and his beloved Radha. The popular temples of Mathura are listed below. 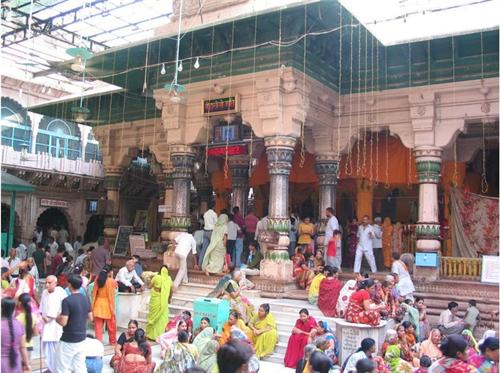 This temple of the Mathura city is among the oldest temples which was constructed under the guidance of Krishna devotee Shri Vallabhacharya. This temple is very prominent in Mathura and is located near the popular areas of Gatashrama and Vishram Ghat. This temple is dedicated to Lord Krishna who became popular by the name Dwarkadish and set up his city in Dwarka Gujarat. In this temple Krishna's deity is situated along with his beloved wives Satyabhama and Rukmani. The specialty of the idol of Krishna at this temple is that it does not contain flute and peacock feathers. This temple becomes the center of attraction at the time of swing festival that takes place at the rainy season of Shravan, and during this fair devotees from all over the world gather at this place. The popularity of this Dwarkadheesh Temple is that the deity of Dwarkadheesh is swing in the golden swing that is decorated with precious and golden ornaments.

This temple is built on the birth place of Krishna in Shri Krishna Janmabhoomi in Mathura. It is among the sacred site that attracts Hindu pilgrims and tourist from far away places. The temple is blessed with Krishna's deity. It is believed that the original deity of Krishna was installed by the great grandson of Krishna named Bajranabh. The popularity is that, this temple has its own festival calendar and the entire festivals of Hindu's are celebrated in the great premises of the Kesava Deo temple. This temple is surrounded by the popular residential areas such as Govind nagar and Jagannath Puri. The popular festivals celebrated at this temple are Latthmar Holi, Krishna Janmashtami and Chappan Bhog.

The Gita Mandir is located at a distance of 5 km away from Mathura city. It is among the most popular attraction and known temple of Mathura. This temple was constructed by the popular industrialist Birla. Gita Mandir is known for the unique and latest art and architecture that is depicted in construction of this temple. The beauty of the temple lies in the beautiful paintings and carvings that are designed in it. The beautiful image of the Lord Krishna is the center of attraction. This temple gets its most of the beauty at the time of celebration of several Hindu festivals like Holi and Krishna Janmasthami. The materials offered in prayers are available near the temple.

Click Here for more details on Gita Mandir in Mathura

This temple is built by Rai Shilji and the sculptures of this temple is largely resembled with the famous Madan Mohan Temple. The construction of the temple was over in 1632. However, this temple was destroyed and the new temple was re-constructed in 1819. The Gopi Nath deity was established by Vajranabha and further, it was worshiped by Madhu Pandit whose body was buried near the temple. In this temple there are several other deities that rests near the main deity of Gopi Nath. The deities are Lalita Sakhi and Radhika that are located to the left side of Gopi Nath and Jahnava Thakurani is located to the right. Along with the above deities there is a separate deity of Mahaprabhu Shri Gaurasundara.

This temple of Devi Chamunda is known for its ancient existence. It attracts most of the pilgrims visiting this Mathura city and is located near Gayatri Tapobhumi. 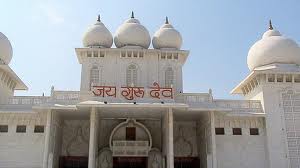 This temple is less popular in the city as compared to the other temples mentioned above, however, it is preferred by most of the visitors of the city to en-cash its beauty.

Other Temples in Mathura

Apart from the above-mentioned temples of Mathura and nearby locations, there are several other less known temples that are located in the popular area of Vishram Ghat in Mathura. The religious flavor of Mathura has its own history regarding the temples that are dedicated to Lord Krishna and Lord Vishnu along with Lord Shiva. The lesser known temples of the Mathura city in Vishram Ghat are Yamuna Krishna Mandir, Narasimha Temple, Mukut Temple, Neelakantheshwar Temple, Murali Manohar Mandir, Veni Madhav Temple and Langali Hanuman Temple. All these temples holds their importance in Hinduism and are of religious important to the pilgrims and are greatly attached to the Hindu pilgrims.