Areas around Mathura have a lot to offer in terms of sightseeing, pilgrimage, shopping, educational routes like the museums and archaeological digs and for the environment enthusiasts there are the bird sanctuaries and plenty of nature’s bounty to immerse oneself in. 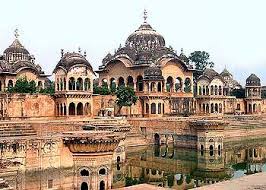 A number of places are known because of their mention in the lively childhood episodes of Lord Krishna. Some of the most famous ones are definitely Vrindavan placed just 17 kilometers from Mathura. A part of the pilgrimage circumference of visiting the Lord’s Janambhoomi, Vrindavan has a lot to offer in terms of the temples there are to see, the many festivities that go on around there all the year around and the special festivals that are organized annually to attract tourists and also rejoin the devotees with the Lord. The beautiful temples like the Krishna Balaram Temple more famously known as the ISKCON Temple and the Banke Bihari Temple besides Nidhivan are places that the pilgrimage circuit is incomplete without. In fact both Vrindavan and Mathura may even be virtually considered twin cities. Both have a large number of temples and devotional ceremonies to offer especially to those who are regular visitors to Vrindavan and Mathura. In fact the pilgrimage is not considered complete if one of the two is not visited. Besides these there is the added attraction of paying obeisance at the Goverdhan Parvat as well as at Gokul Dham both of which places lie on the way from one of the twin cities to the other.

A little over fifty five kilometers away is located the magnificent world heritage building of the Taj Mahal in Agra. Barring Fridays the monument is open to viewing all days of the week and the visitors from Mathura can plan a day’s drip to take in the pristine beauty of this edifice besides other sites nearby. Besides sight-seeing the place is a shoppers' delight as there are many quaint shops that sell all kinds of handicrafts and almost everyone going there come back with a small replica of the Taj. 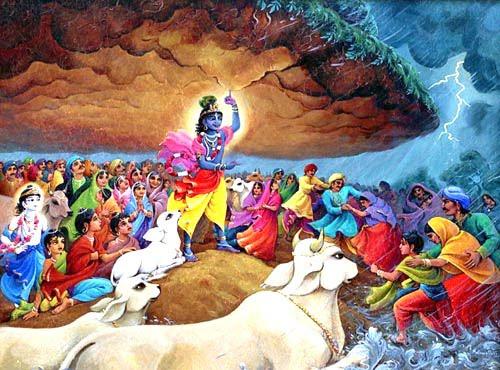 In the west of Mathura, at a distance of almost 23 km, Govardhan is a place that is visited by the religiously inclined people. 8 km in length, the Giriraj Hills is made up of sandstone and is closely associated with Lord Krishna. People from all corners of the country and also across the borders come here to worship and seek blessings from Lord Krishna. According to the legend, Lord Krishna had once lifted Govardhan Hill on his smallest finger to save the people of his village from the wrath of Indra, the God of Rain. The Mansi ganga Tank lies adjacent to the city of Govardhan and it is believed that it came in existence only after His divine intervention. One can visit Kusum Sarovar and Haridev Temple while in Govardhan. Govardhan Parikrama is believed to provide the devotee with eternal blessings.

Many buses run from Mathura to Govardhan at regular intervals. It can also be reached by taking a cab or by your own vehicle.

Bharatpur Bird Sanctuary is located about 40 kilometers away and promises a rare viewing of birds, wildlife and the adorable bounty of nature. Many of the sightseers would appreciate the arrangements like open jeeps and safaris trails for the fascination of the young. Thousands of endangered species of birds can be seen here. Some of them include Siberian cranes and more than 230 species have made Bharatpur Bird Sanctuary their home. In 1971, it was declared as a protected sanctuary and is also a World Heritage Site. Named after the temple of Shiva, Keoladeo, this bird sanctuary was established almost 250 years ago. In the beginning it served as a hunting ground for the maharajas of Bharatpur. Until 1972, the royal families were allowed hunting here. But in the year 1982, the government banned grazing here.

Located at a distance of almost 16 km from Mathura, Gokul portrays the journey of Lord Krishna through His childhood. This is the place where Lord Krishna was brought up secretly by His foster parents Nand maharaj and Yashoda maiya. There are many places still present in Gokul where the relics of the Lord can be seen. One of the most famous temples in Gokul is Gokul Nath Ji where one can witness extravagant celebrations of Trinvat mela, Janmashtami and Annakoot. Raman Reti in Gokul is often visited by the pilgrims wherein they roll over the sand to seek blessings from the Lord. It is a seat of Bhallabhacharya, who was a descendent of the Bhakti movement of 16th century.
One can commute from Mathura to Gokul by taking a bus or hiring a cab. Not only one learns about the ancient mythology of India but can also seek divine blessings from Lord Krishna.

Towards 26 km west of Mathura and 5 km north of Govardhan is Radha Kund. It is the place where Arista, bull demon was killed by Lord Krishna. This event of death is commemorated with a huge fair in the month of Kartik (usually in October or November). A village surrounds this pair of lakes. According to the mythology, Lord Krishna took a bath here to get purified. It is especially visited by the women devotees to take a purified dip in its water since times immemorial. On the way from Govardhan to Radha Kund, one can also visit the Memorial of Raja Suraj Mal of Bharatpur. Regular buses are available from Mathura to Radha Kund. One can also hire a cab or travel by his own conveyance. This pious journey takes almost half an hour.

Located at a distance of almost 32 km from Mathura, Nand Gaon is a village that holds a lot of religious importance. One of the typical villages of the Braj, it is connected to the various legends of Lord Krishna. Nand Gaon, the home of Nand Maharaj, the foster father of Lord Krishna, is the place where Lord Krishna spent many years of His childhood. There are many historical temples in this village that is located in the lap of Hills. Nanda Rai Temple is one of the most significant temples in the area. It is home to many other temples that have deities of Lord Narsimha, Yashoda Nandan, Nritya Gopal and more. Another attraction here is the Pan Sarovar. This tank that has ghats on along its sides was regularly visited by Lord Krishna along with His cows. There are many local buses that run from Mathura to Nand Gaon at regular intervals. One can even take a private cab or travel by his own car.

During the ancient times, Dan or taxes were collected at this place. Situated at the top of Govardhan Hill, this is the place that resembled the neck of the peacock as the shape of the Govardhan hill resembles a peacock. As the legend says, the women during the time of Lord Krishna passed this place along with cheese, butter, yoghurt and milk across the Hill to reach the other side. This place gained more importance when the gopis were once crossing this place with their stock to perform a yajna at the Govinda Kund and Lord Krishna and His cowherd friends - Madhumangala, Sridama and Sudama blocked their way and asked them to pay tax. It was after this incident that the name emerged as Dan Ghati. Travelling in local or tourist buses from Mathura to Dan Ghati is the easiest way to commute. Another temple, the Lakshmi Devi Temple lies en-route Mathura and Dan Ghati. If one travels by his own conveyance or hires a cab, it usually takes around one hour. Most of the visitors enjoy the journey as the route is like going uphill and one is surrounded by scenic landscapes.

Located 20 km south east of Mathura, Baldeo is a place that is well known for its temple dedicated to Lord Balaram, Lord Krishna’s elder brother. It was built almost 200 years ago by a well known architect from Delhi, Shyam Das. The deities of Lord Balaram and His wife Revati are worshipped here. Legend says that these deities were found near the Kshir Sagar or the brick lined Balbhadra Kund. Baldeo has two annual fairs and at that time, the temple court is fully crowded with pilgrims. It is easy to travel from Mathura to Baldeo as there are plenty of local buses available. One can even combine the other nearby destinations such as Govardhan, Mahavan and Gokul, making the pilgrimage tour all the more interesting.

Barsana is located at almost 45 km from Mathura and is one of the most popular pilgrimage destinations in the Braj. Being the place where Radha Rani, the eternal consort of Lord Krishna spent her childhood, it holds an important place in the hearts of the devotees of the divine couple. As the legend goes, Lord Brahma once asked Lord Krishna to spend some time on the earth. At that time, Lord Krishna asked Brahma to acquire the form of hill. Barsana is surrounded by four hills and it is believed that they symbolize the four heads of Lord Brahma. This is how this religious village got the name, Brahmsarin. There are plenty of temples that are dedicated to Lord Krishna and His consort Radha Rani. One of the most famous temples in the Ladli Ji ka Mandir named after Radha Rani, who was fondly called as Ladli Ji in Barsana. Another place worth visiting is the Prem Sarovar that was the first meeting point of the divine couple. Pila Pokhra is another pond that must be visited. Barsana is known all over the world for its Holi celebrations. Fondly known as the Lathmar Holi, this festival is celebrated between the residents of Barsana and Nandgaon.

The national capital of India, Delhi needs no introduction. Serving as the capital to many rulers and empires, Delhi has plenty of monuments glorifying each era. Ranging from Red Fort to Qutub Minar, India Gate to Rashtrapati Bhawan, old markets of Chandni Chowk to the latest malls, one finds all kinds of tourist attractions here. One can even enjoy some fresh air at the Lodhi Gardens or Nehru Park and visit the 5 star or local street side shop for relishing various cuisines. Located at a distance of almost 170 km from Mathura, Delhi can be reached by a local bus or a cab or your private vehicle.

Popularly known as the Pink City, the capital to the Indian princely state, Rajasthan, Jaipur is one of the well known cities in India. Adorned with numerous palaces, forts, temples, gardens, wildlife and museums, this place offers all to the tourists. It is situated at a distance of 218 km from Mathura and is accessible by road. Many local buses are operational from Mathura and Jaipur while one can also hire a cab and reach the city in around three and a half hours.